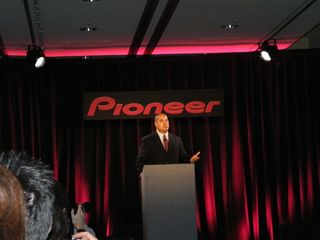 Pioneer's presence at CES 2011 revolves around its in-car products

At CES in 2008, Pioneer was one of the most exciting brands at the show.

It launched new world-beating 9th-generation Kuro plasma TVs and showcased some staggering PDP tech that's still to be matched by any of the other big brands three years on.

But however much we don't want to believe it, Kuro is dead. And Pioneer's press conference at this year's CES show concentrated solely on in-car mobile products.

Some journalists abandoned the queue for the press conference when they heard it was mobile products only, but they missed the launch of some fairly nifty in-car systems.

Possibly the most intriguing of Pioneer's new in-car products are two in-dash car stereos which come with Aha Radio integration. The AVIC-Z130BT and AVIC-X930BT both sport touchscreen interfaces and allow you to keep in touch with your favourite social networking sites while you're driving your car.

Yeah, sounds pretty dangerous to us, too. However, rather than having to read your Twitter or Facebook feeds off the screen, these stereos will actually read them out to you through your car's stereo system.

So now, instead of driving to work listening to [your favourite feel-good album here], you can listen to a robotic Microsoft Sam-style computer voice reading out your mum's tweets about baking soda and nail polish.

The system will also download and play your podcasts and all manner of other social web features, all of which require the use of your phone's 3G connection.

During the press conference, Ted Cardenas, director of marketing for the car electronics division at Pioneer, also announced the new Pioneer SPX-SC101 SmartCradle for use with the Apple iPhone.

It's designed to turn the iPhone into a more usable device for in-car satellite navigation. It's a lot like a standard sat nav cradle, and is similar to many already released in that it has its own external GPS receiver, a gyroscope and an accelerometer to boost the iPhone's GPS performance.

It includes video and audio-out functionality, which means you should be able to use a compatible in-dash screen instead of the one on your iPhone. Helpful if you've got a nifty in-dash stereo with a big and sexy display. No, we don't have one either.

And finally, Pioneer also announced the expansion of its in-car Pandora internet radio range of products – there are now twelve Pioneer systems that support the service, although as Pandora is still blocked in the UK, don't expect to see these features our side of the pond.