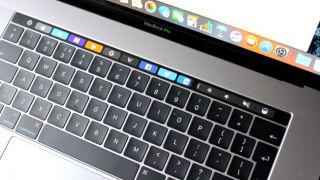 It’s been a big week for Mac news, as we’ve heard a lot about the incoming new iMac and Mac Pro, and now a further rumor has sneaked out asserting that Apple could produce a future MacBook Pro 15-inch model which doesn’t have a Touch Bar (alongside some interesting clarifications regarding the aforementioned Mac Pro).

As you’re probably aware, with the newest MacBook Pro line, there’s only one notebook which comes sans Touch Bar, and that’s the lowest-end 13-inch version. If you want a 15-inch MacBook Pro, you get the Touch Bar – like it or lump it.

Apple has evidently realized that this situation is annoying some folks who don’t really see the point of the context-sensitive touch strip, and according to OS News (backed up by another source as Apple Insider points out), the company is mulling producing more MacBook Pro models which don’t have the Touch Bar.

That means we could see a base 15-inch MacBook Pro which comes without the OLED strip, and as a result costs a bit less. Remember, we’ve already heard that Apple intends to bring prices down with the MacBook Pro range in this year’s refresh.

Furthermore, Apple is apparently considering more professional-pleasing features for its Mac range, including the possibility of tying the iPad Pro up with Mac computers to allow folks to use the tablet as a second screen (indeed, touchscreen) in Cintiq-like fashion. There are already third-party apps that allow you to do this, of course, but having the functionality built directly into the operating systems would obviously be a boon.

At this point, we’ll put the brakes on and issue the usual reminder – this is only speculation right now.

Oh, and that clarification regarding the Mac Pro we mentioned? OS News reckons that the decision to make this new much-more-configurable ‘modular’ Mac Pro was only made recently, with development on the hardware kicking off just a few weeks back.

Earlier this week, Apple said the computer was at least a year away, seeming to hint that it could arrive next year. However, according to this report, late 2018 is the most optimistic timeframe for a launch, with it being more likely that the fresh incarnation of the Mac Pro will be out in 2019.

That’s not-so-great news for those who are desperate to see the back of the ‘trashcan’ Mac, as the current iteration is nicknamed by some.