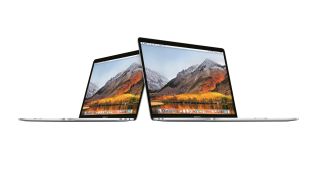 Apple has today announced that it has updated its MacBook Pro range for faster performance, with various new features aimed at professionals, making the MacBook Pro 2018 “the most advanced Mac notebook ever”, according to the company.

The new MacBook Pro with Touch Bar comes with 8th generation Intel Core processors, with the 15-inch version featuring a six-core CPU, and the 13-inch version coming with a quad-core processor.

These new processors should seriously boost the performance of the new MacBook Pro, especially when it comes to running intensive software, and multitasking. As Apple points out, the MacBook Pro is already the most popular notebook for programmers and developers, and the new MacBook Pro has been designed to compile code faster, and run multiple virtual machines and test environments better than before.

The new MacBook Pro range also supports up to 32GB of RAM, a True Tone display, and an improved third-generation keyboard to make typing quieter. This will be good news for anyone who's ever annoyed their co-workers by frantically typing away on their notebook.

The specs in detail

The 13-inch MacBook Pro will come with:

Both MacBook Pro models will go on sale in Apple retail stores and Apple Authorized Resellers later this week.

We’re waiting to hear from Apple about official UK and Australian pricing.

Apple also revealed that the new MacBook Pro is part of its Back To School promotion, which allows students, parents, faculty and staff to buy the devices through the Apple Education Store. This includes a pair of Beats headphones with the purchase of an eligible Mac or iPad Pro, and special education pricing for various devices.

Apple also announced a range of new leather sleeves for the MacBook Pro. These come in Saddle Brown, Midnight Blue and Black. They are made from high-quality leather and include a soft microfiber lining for additional protection.

We’ll be getting the new MacBook Pro for review soon, and we also have an initial hands-on review of Apple’s latest notebook.