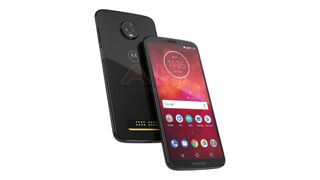 The Moto Z3 Play mid-range smartphone has made its first appearance in an alleged set of renders shared by Android Central.

The leaked renders are said to be an exact depiction of the next Motorola phone. From the looks of it, it seems like a logical and realistic design, but take the image with a pinch of salt, until more pop up.

The image suggests removal of the front-mounted fingerprint sensor as seen on other Moto Z phones. Instead, it has gone the Sony way by shifting it to the side below the volume buttons.

This could be a move to accommodate a bigger screen with minimal bezels to achieve a larger screen to body ratio. Also, the side mounted fingerprint sensor is also likely to double as a power and lock button too.

The Moto Z3 recently paid a visit at the FCC, suggesting the presence of a Snapdragon 636 chipset with 4GB of RAM and 32GB/64GB storage options. A 6GB RAM variant is also rumoured to be launched, alongside the base model.

Since we've seen the 18:9 aspect ratio on the new G and E series phones, it is safe to assume that the Z3 will have the same.

Furthermore, the purported official render depicts a dual camera module on the back, which is said to be a combination of 12MP and 8MP sensors.

Lastly, a 3,000mAh non-removable battery is said to be powering the Moto Z3 Play.

The expected launch date of the phone is around June, so wait for more information to come in as the launch gets closer.