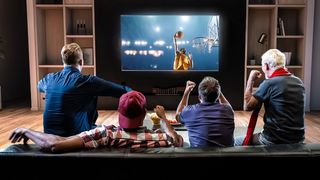 If you’re buying a new television, chances are you’ll be looking for a certain TV brand over the others. But which really is the best TV brand, and should be looking further afield?

It’s easy to grow accustomed to the kind of TV you’ve used before, especially given the way that different makes vary in their smart TV platforms, format support, audio capability, and the underlying panel technology within the display.

There are also large market forces determining which TV brands are available in your local retail stores, shown to you in online advertisements, or just sound vaguely familiar when you’re in the throes of the latest TV sales.

But if you want to make sense of which TV brand is which, and the important differences between them, here’s our definitive list of the major players and their distinct offerings.

Samsung is a TV brand you’ve almost certainly already heard of, given its position as the biggest seller of TVs worldwide.

The South Korean electronics manufacturer has a large user base for a reason – it offers a wide range of sets at a variety of price points, with a base level of quality above more budget brands. Samsung is also a big backer of LED/LCD TVs, with a wide range of mid-price 4K TVs that sees new models every year.

Unlike some of its competitors, too, Samsung doesn’t make the jump to OLED for its high-end sets, sticking with quantum dot LED (or ‘QLED’) panels in its premium, high-contrast displays – with thousands of nits brightness making for dazzling output. While OLED TVs offer stiff competition, breakthroughs like Samsung’s Ultra Viewing Angle technology – and more forgiving pricing – are helping it keep the edge, while plans for QD-OLED hybrids could see Samsung cement its dominance further.

Samsung is also pushing the adoption of 8K TVs, ensuring its flagship QLED each year uses the ultra-ultra-high resolution, even if the average shopper probably won’t have anything more than 4K in their sights for now.

Samsung is also the only TV manufacturer to have their own, in-house voice assistant, Bixby. It isn’t particularly widely used beyond a handful of Samsung devices, unlike Amazon’s Alexa AI or Google Assistant, given Bixby’s less capabilities. However, you will find it installed in high-end Samsung TVs to allow for voice recognition and navigation of Samsung’s Tizen interface.

Angling after a Panasonic TV? While this Japanese brand doesn’t sell commercial sets in the North America, its incredible GZ2000 TV is used as a monitor for professional Hollywood colorists, given its high-contrast output and custom OLED panel. It’s really that good, and speaks to the cinematic quality of Panasonic’s displays and the power of its HCX Pro Intelligent processor.

For those in the UK, Europe or Australia, though, Panasonic sets offer a huge array of advantages, from their accurate color mapping to extremely wide HDR format support – including HLG (hybrid log gamma) broadcasts, and both HDR10+ and Dolby Vision dynamic HDR, even on mid-range LED sets like the Panasonic GX800.

Panasonic’s hand in camera manufacturing also led to the introduction of an HLG Photo Mode on new Panasonic TVs, giving budding photographers a way to see their images in HDR quality up on a TV screen.

If your eye’s been caught by an OLED television, you can thank LG. The manufacturer makes OLED panels for both itself and competitors, and has enabled the resurgence in OLED years after interest in the technology was waning.

Does that mean LG makes the best OLEDs? Possibly. The LG C9 OLED is in first place on our best OLED TVs guide, with the ‘floating’ glass display of the LG E9 not far behind. That’s thanks to brilliantly vivid colors, sharp contrast, gorgeously deep blacks – and LG’s leading webOS smart platform tying the whole experience together.

LG sets also tend to have a bit more ‘pop’ to the colors, compared to the restrained tone mapping of sets sold by Panasonic.

LG doesn’t support HDR10+ like Samsung or Panasonic, but you’ll find plenty of Dolby Vision and Dolby Atmos support across its high-end TVs.

Hisense is a name you’ll be hearing a lot if you’re after a bargain TV. The budget TV brand offers premium technologies like 4K and HDR for a decent cut below what you’d usually pay, making the TV displays of tomorrow far more accessible for hordes of people. It can also boast offering the cheapest OLED television (the O8B) on the market.

Processing issues aren’t uncommon with Hisense sets that don’t quite have the power to maintain smooth images, or the dedicated dimming zones to prevent light blooming – and whether you go with a Hisense TV will depend on how important those visual artefacts are.

But there’s no denying the sheer value of many Hisense TVs, while the brand has also branched out with some television designs that really push the envelope – like the ultra-thin Sonic One or the Tri-Color Laser TV / projector hybrid.

Philips: a TV brand with one standout feature

Another TV brand that isn’t licensed to sell its sets in the US – but Philips has plenty to recommend it. Its high-end OLED TVs focus a lot on sound quality, with Bowers & Wilkins powering built-in soundbars in the OLED+903 or OLED+984 – and support for both HDR10+ and Dolby Vision meaning Philips’ premium sets don’t slack in the HDR department either.

But possibly the most unique thing to Philips TVs is their Ambilight technology, which projects onscreen colors onto the wall behind the television when in use. It may not change what’s happening in your favorite TV shows, but boy is it immersive – with sets that use three-sided or four-sided Ambilight depending on how fancy you go.

Possibly to be expected from a brand so involved with music – through, you know, Sony Music – these sets really deliver on audio technology. High-end sets feature Sony’s proprietary Acoustic Surface Audio+, which uses strategically placed drivers to emit sound from the TV panel itself, rather than through downward, rear, or upward-firing speakers.

The direction of the audio is tricky when the visuals need to be front and centre, and while other TV brands have figured out some workarounds – such as the TV stand on the LG C9 OLED, which funnels downward-firing audio towards the viewer – Sony has made the best headway here.

New 2019 Sony TVs are also starting to implement spatial audio that can locate where on the screen sound is coming from – something that you won't get everywhere else.

Heard of TCL? You should have – with around 10% share of the global TV market, this Chinese electronics manufacturer has stormed into our homes in the past few years and only behind Samsung and LG in terms of scale.

Like Hisense, it specializes in low-cost televisions, hoping to bring an equivalent picture of more expensive mid-range sets while cutting corners in the right places. The processing and picture quality may take a hit, but not as much as you'd think – and for what you get at the price point it's hard to complain much about it.

TCL’s most out-there TV designs tend to be reserved for its home turf in China, but its 5-Series and 6-Series TVs in the US are some of the best you can get on a budget, especially with the Roku smart TV platform in so many of its sets. It’s not quite as big in the UK, however.

Depending on where you shop, you’re likely to see some different logos on your television. Polaroid (UK or US) and Sceptre (US) are two TV brands you’ll find on sale in supermarkets such as Walmart or Asda, offering television displays at a truly minimal price.

You won’t get the picture performance of most brands on this list – you get what you paid for – but their low price and ability to be put in a shopping cart along with your groceries naturally translate to strong sales. Be wary of any of these sets that promise high-end features like Dolby Vision HDR, though, as the processing is often not advanced enough to really deploy them as intended. For cheap and low-resolution small TVs, however, it’s definitely an option – with some Ultra HD models like the Polaroid 4K TV being surprisingly capable for the price.