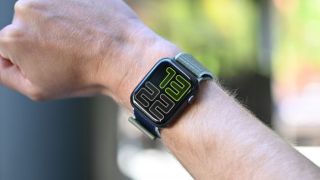 Apple has been bolstering the health features on its Apple Watch smartwatch for some time now with the addition of an ECG sensor, as well as added health-tracking features.

That's why it's no surprise that a recently filed patent shows Apple is working on integrating new health sensors into the Apple Watch.

As reported by Apple Insider, the new sensors could help monitor and treat Parkinson's Disease. They would work by monitoring the movements of the wearer and analyzing the data using the Unified Parkinson's Disease Rating Scale (UPDRS).

Parkinson's Disease is characterized by a number of symptoms, including tremor and dyskinesia. This is an uncontrollable and involuntary movement, which may look like twitching or swaying.

The new proposed sensors detailed in the patent would not be used to diagnose Parkinson's Disease. Instead, the technology would provide useful monitoring of the movements associated with tremors and dyskinesia, which could provide valuable insights to healthcare providers.

"[This] provides all-day symptom/severity tracking information [and] provides a clinical tool for evaluating patient response to medication," Apple says in the patent application. It could also improve the quality of life of the wearer and enable them to "better plan activities around symptom patterns."

Right now those with Parkinson's Disease make a note of symptoms themselves. However, Apple believes this kind of self-reporting can be inaccurate, which is why the company proposes "passive tracking of dyskinesia and tremor symptoms using a wearable computer."

Although sensors to monitor Parkinson's Disease could be a bold next step for Apple, it's worth bearing in mind we do see a lot of new patent applications being filed every week – they don't always make it into finished products.

However, even if this specific technology isn't integrated into a future version of the Apple Watch, it points to an interesting, and specific, health focus for Apple's wearable technology moving forwards.