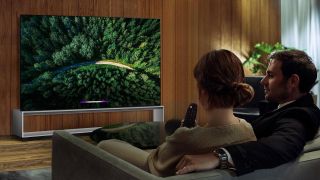 In the race between the two major TV giants, LG has sprung ahead of Samsung and nabbed itself the right to claim the world’s first '8K Ultra HD' TV, as certified by industry standards.

Specifically, this means that LG is the first to be using the “8K Ultra HD” logo (below) and definition set in place by the Consumer Technology Association (CTA), starting with the company’s line of “Real 8K TVs” being unveiled at CES 2020.

The logo and definition were revealed by CTA in September and are designed “to help retailers and consumers identify products that meet the technology industry’s 8K Ultra HD requirements.”

The full criteria for this certification is rather extensive, and includes the need to have “at least 33 million active pixels, with at least 7680 horizontally and 4320 vertically within a 16:9 viewable window”, as well as the capacity to upscale SD, HD, and 4K video to 8K.

These TVs must also possess at least one HDMI input capable of supporting the aforementioned resolutions as well as bit depths of 10-bits, but most crucially for LG, the “display shall meet a minimum of 50% contrast modulation using a 1x1 grill pattern.”

Contrast Modulation (CM) is a method of measuring the ‘visible resolution’ of a display, which discerns between the amount of pixels that can actually be seen rather than the number that are technically present – it’s possible, for instance, to have a 7680 x 4320 display that doesn’t visually reflect such a high resolution.

The CM measurement is set out by yet another standards association – the International Committee for Display Metrology (ICDM) – and is a percentage that compares the luminance of purely black and white lines with the width of a single pixel.

LG claims that its 2020 lineup of Signature OLED 8K TVs and 8K NanoCell TVs all deliver “CM values in the 90% range, while some other models in the industry remain in the low double digits”. These results have been verified by two third-party testing organizations – Intertek and VDE (Verband Deutscher Elektrotechniker).

Technically, LG had already met this threshold, as it announced that its line of Real 8K TVs had exceeded this standard back in early September, before CTA had even revealed its logo and definition, but now third parties have tested the claims, both LG and CTA have made it official.

This all seems to be a clear win for LG, but unfortunately it gets even more complicated from here on out. Crucially, CTA isn’t the only association that is measuring 8K standards, as the aptly named 8K Association (8KA) also has a minimum threshold in place for the tech specs of a panel, and it doesn’t include Contrast Modulation whatsoever.

The 8KA was founded in part by Samsung and the South Korean tech giant continues to be a principle member in the association, along with most other major panel producers with one notable exception – LG.

While Samsung’s panels don’t meet the CM standards enforced by the CTA, they certainly do meet and exceed those set by the 8KA, so it’s possible that the two TV giants are arguing past each other at this point.

Regardless of the apparent shifting in the goal posts and the dense sea of acronyms and niche measurements, it’s clear that the healthy competition between Samsung and LG will produce some impressive TV tech, but we recommend taking marketing speak from both companies with a degree of caution.