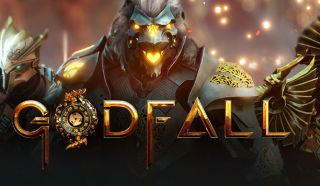 At the Game Awards, we finally saw another game launching with the PlayStation 5 that's coming next year - and that next PS5 launch title is Godfall, a console exclusive coming holiday (end of year) 2020 that looks like a hack-and-slash Destiny.

We know nearly nothing about the game, made by studio Counterplay Games and Gearbox Publishing, save for what's revealed in this initial teaser trailer. What look like player characters in ornate armor are thrown around a storm-tossed decadent palace before staring at a colossal tower - and wrapped around the top, a gargantuan multi-headed monster.

The words 'loot' and 'legendary armor' are the operative words here - if it's published by Gearbox, it wouldn't be surprising if some loot-hunting Borderlands 3 DNA smuggled in. But unlike that satire-laden looter-shooter, Godfall seems like a more serious and traditionally heroic game, which puts it more in tune with Destiny.

Godfall will be a third-person game, with co-op gameplay in parties of two or three. While yes, it's a PS5 console exclusive, it will also come to the PC through the Epic Games Store. We'll figure more out about the game when it comes in the end-of-year holiday 2020 season.