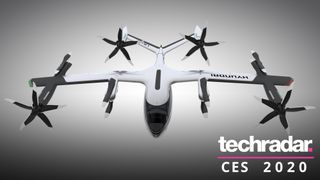 At CES 2020, Uber and Hyundai showed off a full-size mock-up of a flying taxi that both companies hope will be ferrying you above congested city streets by 2023.

The electric plane, called Uberdai, will carry a pilot and three passengers up to 60 miles, at speeds of up to 180mph, slashing journey times and helping get cars off the road. Eventually the craft will be automated, but for now the two companies are focusing on manned craft.

The flying taxi market is starting to get pretty lively. Last year, Boeing began test flights to test the safety of Boeing NeXt, an electric aircraft with passenger pods designed to travel up to 50 miles, and Bell Helicopter unveiled the Bell Nexus, which the company hopes will "redefine air travel".

The difference with Hyundai's plane is its partnership with Uber, which is a name synonymous with ride-sharing throughout much of the world, and already has the infrastructure in place to offer flights as an option alongside trips by car, bike, scooter, helicopter and even submarine.

Uber has been aiming for the skies for several years now, teaming up with various aerospace companies to build a fleet of mini aircraft. At the Uber Elevate Summit in June 2019, it revealed a concept created in collaboration with Jaunt Air Mobility – a business that's aiming to create a fully autonomous aircraft by the end of 2029.

This design was a cross between a helicopter and a plane, with a rotor to get it off the ground, and wings for gliding once airborne to conserve power.

"It's called the compound aircraft, and what it's doing is really trying to get the best of both worlds of hover and high-speed efficient flight," Uber's head of engineering Mark Moore said at the event.

Uber intends to launch its first swarm of flying cars in the US and Australia in 2023, with schemes planned for Dallas, Las Vegas and Melbourne. We'll keep you updated as we learn more over the coming months.