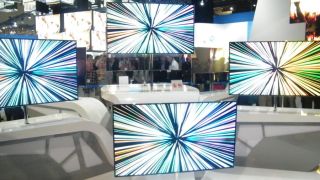 Samsung and LG are looking to capitalise on 2012 being an Olympic year and release their premium OLED TVs before the games begin.

Both LG and Samsung have been coy about the release of their 55-inch OLED TVs, both of which were the undoubted stars of CES 2012.

Samsung has told TechRadar in the past it was looking to launch its OLED set later in the year but now industry sources are suggesting that a European launch could be just months away.

According to Digitimes, both manufacturers will make sure their televisions are on the market soon, with LG set for a May release and Samsung not far after.

Samsung has ties with the Olympics so it makes sense for the company to get its premium product in the market before the games begin in July. It is also thought that this could be one of the reasons Samsung had postponed the launch of the Samsung Galaxy S3 as it wanted the launch to tie in with the Olympics.

Even though the Olympics is a great time for promotion, due to the purported cost of the televisions, it is not thought that OLED will become a mass-market proposition for some years to come – but the fact that both are coming to market does make it easier to promote the technology.

Couple this with news that Samsung is to show off a new OLED TV at IFA 2012, with a whole new design concept, it makes sense for the range it showed off in Las Vegas in January to hit shops sooner rather than later.