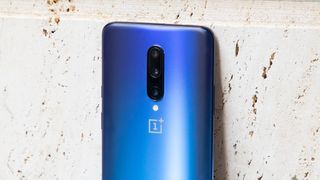 OnePlus is hosting an event in London on Thursday October 10, where it's expected the company will reveal more details about the release of the OnePlus 7T and, perhaps more excitingly, the OnePlus 7T Pro.

The flagship phone from the company is expected to be similar to the OnePlus 7 Pro, but a new rumor suggests the 7T Pro may come in a different shade of blue than we saw on the 7 Pro earlier this year.

This comes from information shared by Twitter leaker Samsung Leaks that has shared an image of the color of the OnePlus 7 Pro next to the newer phone. You can see that below.

The tweet doesn't share any details on how many different colors there will be, but it does give us an idea on the new shade of blue that the company may embrace for this next handset.

It's also expected OnePlus will be introducing a variant of the upcoming phone created in collaboration with racing brand McLaren.

The company's CEO Pete Lau has shared an image of a box that looks similar to previous designs for the McLaren editions of its phones.

We won't know anything for certain until October 10 where it's expected the OnePlus 7T Pro will be announced. We'll be there live at the event to share the details with you as we first hear them.

Via GSMArena, The Next Web