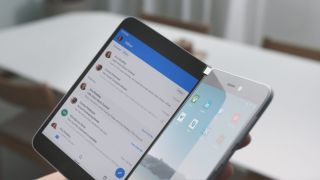 Microsoft’s Surface Duo, the incoming dual-screen Android phone, has been spotted being used on a train in Vancouver, with someone sharing a video of this very public sighting on YouTube.

This is an interesting glimpse of how the hardware is shaping up, and there are a few points to chew over here, but first you might want to check out the video yourself (note that it begins with a few stills).

The clip shows various different tasks being performed on the Surface Duo, including a brief spot of casual gaming, alongside checking emails. More generally, it (again) illustrates the way the 5.6-inch screens seamlessly switch to having content flowed across them (or have separate apps on each of the two displays). At one point, the device is used as a single screen, with the other display folded back (and inactive).

The user who shared this video on Twitter, Israel Rodriguez, also observed that there is a front facing-camera (with flash), but no camera on the outside of the Surface Duo.

If you recall back at the launch of the dual-screen phone, the device didn’t have a rear camera, and so it still doesn’t. Microsoft has promised that the Duo will have a “world-class camera” of some form or other, though.

At one point, the person using the dual-screen device appears to struggle to get the interface to work in the required manner, but there are doubtless still plenty of UI issues to be ironed out at this point.

The video ends with the user engaging in something we often find ourselves doing after using our Surface Pro – namely polishing the fingerprint smears off that mirrored Windows logo on the back.

The Surface Duo is due to arrive at the end of 2020, and it’s a fair bet that the dual-screen phone will command a pretty premium asking price. Microsoft’s chief executive, Satya Nadella, has already been spotted using the device in public, and from what we’ve seen, it seems like the hardware is shaping up nicely.