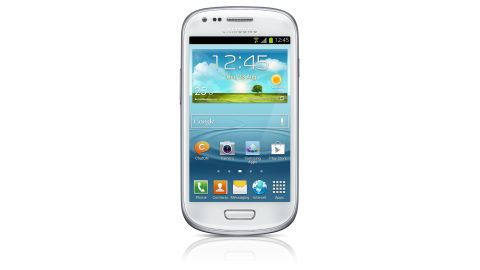 Samsung is famed for its media phones, the Galaxy S2 being its first major success, now being capitalised upon by the Galaxy S3 and the massive (and massively superb) Samsung Galaxy Note 2. Samsung has got a lot to live up to then.

Initially we were a tiny bit sceptical, the lower specs of the Samsung Galaxy S3 Mini not lending itself to a phone that can create and consume media.

Obviously the big disappointment here, when comparing to its high end brethren, is the poorer screen. Thankfully it is still bright enough, with a superb viewing angle, that it doesn't detract from the entire experience.

A quick note to the internal storage, we mentioned on our Samsung Galaxy S3 review that the OS took up 5GB of space.

Thanks to the optimisation of Jelly Bean and other measures, this has been cut to 'just' 3GB on the Samsung Galaxy S3 Mini, but that does mean the 8GB version only sports 5GB internal storage.

Storage has always been where Samsung has beaten Apple, and now HTC and Google. Yes, we know that the Cupertino brand has up to 64GB of storage, if you can afford it, but the Koreans have taken the microSD route, enabling you to throw oodles more space its way.

As for the free headset, Samsung has also managed to create a perfectly decent set of earphones. They sit comfortably and come with varying sized ear buds, and sound clear without having to reinvent the experience.

The first thing to notice is that as soon as you connect your headphones to the Samsung Galaxy S3 Mini, the preinstalled media options all pop up in the notifications bar, providing very easy access to YouTube, Music Player, Video Player, Video Hub or FM Radio.

It's a little touch, but one that we're pleased Samsung has thrown in, as it helps make the media experience seem a lot smarter, a lot more intuitive. Firing up the music player and you are greeted with a rather attractive piece of software, albeit just a fancy stock Android player.

This also brings up a little bar in the notifications area, as it has on Samsung Galaxy phones for years. From here you can Play/Pause and skip tracks. There is also a widget to accompany it, which again we were glad to see. Our only slight disappointment was the inability to control directly from the lock screen.

Within the Samsung Galaxy S3 Mini's music player are the usual shuffle, repeat and something very strange known as the Music Square. We've seen it before, and basically it ranks your music by its tone, so that if you're after something Calm and Joyful, the Galaxy S3 Mini will pull up the song you want. It's a little hit and miss at the moment, but we'll keep an eye on it.

The music player also offers an impressive array of equalizer settings, in an area Samsung has termed Sound Alive. There are quite a long list of settings, such as Pop, Rock, Jazz through to Virtual 7.1 and Concert Hall. There's even a custom setting, should you really feel the need to go to town with it.

Another area we were taken with was the DLNA options. Opening the music app to begin, you are faced with the standard Android options of all your music, playlists, albums, artists, the aforementioned music square, folders, and nearby devices.

It's the nearby devices tab we've found most interesting, as it can access the media folders of DLNA enabled devices on your network. Again we found it easier to stream content from the Samsung Galaxy S2 to other devices, but streaming was superb.

From within the settings screen, you can set the play speed from 0.5x to 2x speed, which doesn't add a whole lot of functionality, but is a nice hark back to the days of vinyl records. It also shows that should your tracks have embedded lyrics, these can be called up (not from an online database like on Motorola devices).

Samsung has also provided the ability to have the music turn off automatically, ideal if you need something to just help you drift off to slumber-land.

In all we're really impressed by Samsung's efforts here. Yes there are tricks that maybe we have seen on other devices that we would love to see here, but then we don't want another round of patent wars.

FM Radios are now becoming an almost standard feature on modern smartphones, and the Samsung Galaxy S3 Mini is no exception. As always, you need some headphones plugged in, though that doesn't mean to say that you can't play music through the rear speaker.

In terms of functionality, the Samsung Galaxy S3 Mini found every station we expected it to. The app interface is also well designed, and we loved the ability to record the station, for playback later.

The layout of the video player on the Samsung Galaxy S3 Mini is very sleek and futuristic.

The round buttons are large enough on the smaller screen and the slider is easy to use. Despite the lower resolution, the sAMOLED screen is bright and reproduces colours very well.

True movie aficionados will want the high end devices, but we didn't find the screen detracted from the movie experience.

One of Samsung's biggest selling points on all newer Galaxy devices, which is present on the Galaxy S3 Mini, is the Pop Up Player, accessed by the small button in the bottom right.

This means that you can continue watching your video while you browse the phone.

That said, it was handy on the off chance that one of our three friends had texted us when we were halfway through watching Eastenders.

DLNA streaming is also present in the video player, providing a much slicker experience than the music player.

Overall, despite not being a flagship, market leading device, Samsung has put a lot of attention into the little details that make the Samsung Galaxy S3 Mini a joy to use.

Given that HTC has Watch, Apple has iTunes, and the Play Store now has a movies section, we can see why Samsung wants to get in on the movie download and streaming market. In all though, we don't see why.

Movies aren't cheap, around £8 to buy, and they're generally more expensive than their Play Store counterparts. If Samsung really wants to make a lot of money from Video, we'd have to say that it's going to have to do a bit more work.

DLNA is a massive part of the high end Samsung Galaxy experience these days.

It was once a dedicated app on the Samsung Galaxy S2. In many ways, we preferred that approach. It kept it all the streaming options bundled together, and seemed a little tidier.

Being able to stream music wirelessly to or from a PC, TV, or other DLNA enabled device is a fancy feature, and one that we envision could one day prove to be a big hit (start writing your sci-fi novels now and in 10 years we'll look back like we do with Back to the Future. Now where's our hoverboard?)