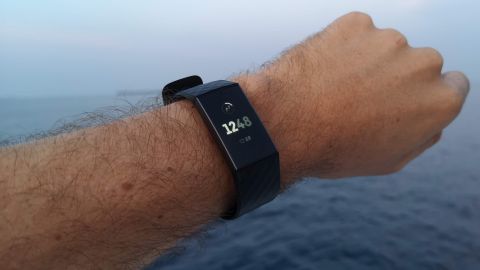 The Fitbit Charge 3 is quite the improvement over the Charge 2, but you should only upgrade if you're after a more slick, lightweight design, a slightly larger display and a few new fitness tracking features.

The Fitbit Charge 3 is one of the company's most accomplished devices yet offering the best fitness tracking experience the company offers in a band design.

There are more high-tech devices from the company now including the Fitbit Versa 2 and Fitbit Ionic, but if you're specifically after a fitness band with that Fitbit branding this may be what you're looking for.

Fitbit announced the Charge 3 in August 2018, and it remains the company's most high-spec fitness tracker despite newer products like the Fitbit Inspire HR being introduced.

The Fitbit Charge 3 offers a variety of exercise tracking modes along with sleep and heart rate monitoring in a more lightweight design than the Fitbit Charge 2. It also sports a bigger screen, plus it's waterproof too.

The fitness tracker comes with some different bands depending on which version you opt for. It's worth noting if you live in Australia all versions of the Fitbit Charge 3 have Fitbit Pay support, but those in the US and UK will have to opt for the Special Edition to be able to use the payment service.

If you choose the special edition of the Charge 3 you'll also get an extra black classic strap thrown in, but whichever tracker you choose you can also buy different straps separately.

The Fitbit Charge 3 has the same rectangular screen and band design as seen on its predecessor, the Charge 2, but the design has been refined and tweaked somewhat.

Firstly, the Fitbit Charge 3 is thinner, so it looks a little less chunky on your wrist. It’s much lighter too, as it’s made from aluminum instead of stainless steel, which the Fitbit Charge 2’s body was clad in. This makes the new device 20% lighter, and you can really feel the difference here. It also feels much more comfortable as a result.

One thing to note however is that there aren't any pressable buttons on the Charge 3. That’s because this one has a full touchscreen rather than the tap-to-cycle screen we saw on the Charge 2, meaning you’ll do most of your navigating around its features with your finger on the display. (On the Fitbit Charge 2 you could only tap it to switch what was displaying).

However, joining this functionality is an inductive button on the left-hand edge of the tracker which you can use to wake the device or go back a screen. It will give you a little tactile vibration feedback to let you know it’s working.

We found that using this button can take some getting used to, as the functionality isn’t so clear at first.

There’s a knack to the way you must hit it in order for it to respond well to your tap, otherwise you’ll find yourself tapping away aggressively until it recognizes your press (like we did at first). Once you’ve got the knack however, it works rather well and proves to be a nippy way to navigate the tracker.

On the underside, the PurePulse heart rate monitor remains but it’s now joined by an SpO2 Pulse oximetry sensor. This makes the overall finish much rounder, and thus more comfortable on the wrist.

Another new update introduced on the Fitbit Charge 3 is the strap design. In place of the chunky metal clips seen on the Charge 2, there is now just a tiny black button which ejects the strap when pushed (as seen on the Ionic for example), allowing you to easily change the straps.

One thing we will add is that the plastic strap that comes bundled with the standard edition does feel a little cheap. A silicone strap (that you don’t have to fork out for additionally after purchase) would have made a world of difference. Nevertheless, the strap feels comfortable, and compared to many other fitness trackers this is a lot easier to wear throughout the day.

The biggest difference on the Charge 3, though, is the screen, which is 40% larger than the display of the Charge 2. It’s still black and white, but it has also had a bit of a resolution boost as well as being a proper touchscreen as we mentioned earlier.

While it’s by no means on the level of that seen on the Versa or Ionic, the screen does its job and is able to display information clearly despite its small size - even in very bright conditions. Its monochrome appearance is a bit sad to look at, especially when you compare it to the Versa’s, but it does ensure battery usage is kept to a minimum.

Another big change in the third generation of the Charge is its waterproofing. The Charge 2 was only 'water-resistant', meaning it could handle a few splashes while you did the washing up, or sweat while exercising.

However, this time around Fitbit has ensured the Charge 3 can track your swimming. Although note this is only pool swimming and not open water swimming. More on that later.