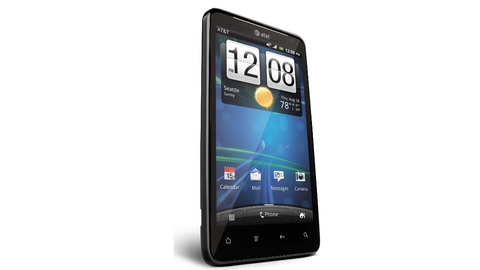 ATT's 4G LTE-equipped HTC Vivid does away with a plenty of HTC's past sins.

On the hardware front, the HTC Vivid gives us little to complain about. Gone is the Cyclopsian camera lens and complicated access that plagued many prior models, replaced with a metal plate that slides up and off for easy access to battery, SIM and SD card.

The result is a handset whose rear angles make it seem thinner than the specs would have you believe. Only 5.07 inches tall, 2.64 inches across and 0.44 inches thick, the HTC Vivid weighs a substantial 6.24 ounces, but considering what's under the hood, we don't consider the few extra ounces much of a liability.

The front features a big, bright 4.5-inch qHD Super LCD screen with 540x960 pixels. Colors were vibrant but not as oversaturated as the AMOLED displays found in competing handsets.

A small notification light rests at the top left edge next to AT&T branding at center, with a thin, almost invisible earpiece above; a front-facing 1.3MP camera lens resides at right. Capacitive buttons for Home, Menu, Back and Search are on the opposite end.

On the back is a small, unobtrusive 8MP camera lens with dual LED flash. The HTC logo is stamped onto a mocha brown aluminum cover, which easily slides up to reveal those aforementioned components inside.

Our only complaint with this design is that once or twice, we reached into our pocket to grab the handset and found this cover slid up as a result. Thankfully, the Vivid continues to function with the lid off, but a case might be recommended just in case.

The left edge features a flush micro-USB port, while a 3.5mm Beats Audio-enabled headphone jack and power/lock button is up top. A volume rocker rests at the right edge, with a small hole for the microphone at bottom.

AT&T offers the HTC Vivid for $99.99 with a two-year agreement, but existing customers can also nab one commitment-free for $449.99.