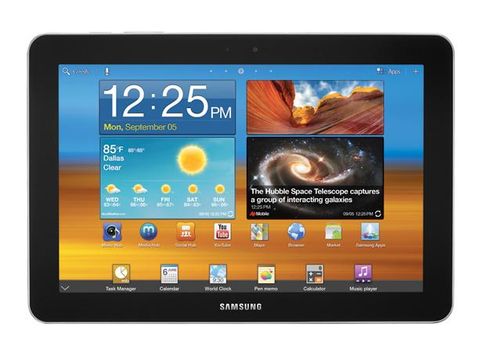 The Galaxy Tab 8.9 is one of the best Android tablets out there

The Samsung Galaxy Tab 8.9 is one of the best tablets yet released.

Taking a lesson from the Samsung Galaxy Tab 10.1 and adding a few features beyond what the Apple iPad 2 offers, this thin, light and longer-lasting tablet is the best option around if you're more interested in portability than in playing games and watching movies on a 10-inch screen.

The slightly smaller size is also a better fit for reading books, browsing the web and checking email.

Some might wonder why this model even exists. After all, there's a slew of 7-inch tablets available, including the Acer Iconia Tab A100, the BlackBerry PlayBook and even the Cisco Cius, which is coming to the UK.

At its 8.9-inch size, the Samsung Galaxy Tab 8.9 fits somewhere between those 'too small for movies' 7-inch tabs and the larger 'too big for everyday mobility' 10-inch models. That makes the 8.9-inch size about right.

The Samsung Galaxy Tab 8.9 is remarkably similar to Samsung's 10.1 version. Both run Android 3.2 Honeycomb - a modern operating system designed specifically for tablets. A few 7-inch tablets use Android 2, which is designed for smartphones. The Samsung Galaxy Tab 8.9 also uses the same Nvidia Tegra 2 processor at 1GHz as the 10.1 model, has 1GB of RAM and has 16GB of internal memory.

There's a 2MP front camera for low-res video chats and a 3MP rear camera for taking photos. There are Bluetooth, HSPA internet and Wi-Fi connections on board.

The Samsung Galaxy Tab 8.9, at 447g, weighs over 100 grams less than the Samsung Galaxy Tab 10.1. You can feel the difference in weight right away. Measuring 230.9 x 157.8 x 8.6mm, there's an extra degree of portability, but you do sacrifice some screen size for movies and games.

Samsung uses a 6100mAh battery, which it claims lasts for about 10 hours. In our tests, the battery lasted about eight hours. The battery is a hair smaller and not as long lasting as the bigger 7000mAh battery found in the Samsung Galaxy Tab 10.1.

Samsung was wise to keep most of the features from the 10.1 model intact. There are widgets that add to the value of the tablet and provide easier access to social networking feeds. Using a unique pop-up application bar, you can also run mini apps such as a calculator and clock that hover above the main screen. You can move these around the screen but you can't resize them.

The Samsung Galaxy Tab 8.9 uses the same design aesthetic as the Samsung Galaxy Tab 10.1. There are only three hardware buttons - one for power and the two volume control buttons. That's a stark departure from other Android tablets that provide several more buttons, USB ports, SD card slots and HDMI ports.

You lose the USB port for adding files using a flash drive or connecting a keyboard, but gain extra portability because the device is so thin and light compared to more computer-like tablets such as the Toshiba AT100.

Samsung did outfit the Galaxy Tab 8.9 with a few interesting tweaks beyond the original 10.1 tab. There's now a screensaver app you can use for playing animations when the tablet sits idle.

In the box, Samsung includes a charger and USB cable and earbuds, but no case or stand.