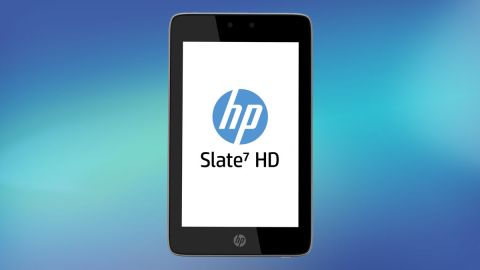 Given that the letters H and D are in the name of the HP Slate 7 HD, it is clear where one of the HP's biggest selling points is.

Backed up by Beats Audio, there is little to suggest that the HP Slate 7 HD hasn't been designed with watching movies in mind.

The screen certainly lives up to its billing: it's both bright and crisp, although it lacks the same pop and sparkle that accompanies full HD tablet screens.

This is somewhat disappointing given that the Nexus 7 comes with a 1920 x 1200 screen, as does the similarly priced Kindle Fire HDX.

I found that the screen struggled when out in direct sunlight. Whilst trying to snap photos, the Slate 7 HD's screen was impossible to see, unless I held my hand up to shield some of the light from the screen.

This is something that will prove frustrating, especially if you want to browse the web whilst out and about.

Beats Audio is also pushed into the tablet, thanks to a collaboration that has seen the technology pushed into a wide range of HP products, including a variety of laptops.

This did make the sound richer when pushed through headphones, although a certain amount of this will depend on what headphones you are using.

Pumping the sound out of the external speaker is a completely different story. The Slate 7 HD suffers from a similar problem as was found when watching movies on the Sony Xperia Z1: the speaker placement.

Whilst this is fine when you want to just blast out some music, it is totally different when you're sat holding the tablet.

I found it very disorientating having all the sound entering one ear, so much so that I would definitely recommend investing in some decent headphones if you plan on watching a lot of movies or shows on the Slate 7 HD.

The other key area that HP will try to capture you with is its 3G Data pass. Selecting this option provides you with a 3G connection of 250MB per month for two years, through a supplied SIM card. Whilst this is a reasonable price, I do wonder just how much data you might get through in a month.

Heavy users who plan on streaming movies or TV shows through the likes of BBC iPlayer will struggle with only 250MB per month, although it's ideal for casual web browsing and sending the odd email whilst out and about on the morning commute.

Pricing will also undoubtedly be another area that the Slate 7 HD will look to compete in. At a mere £169 (about $282, AU$312), it is one of the cheapest tablets on the market, especially with that data package thrown in.

Unfortunately, though, I think the HP Slate 7 HD will struggle in comparison to its more established Android-toting rivals, especially given the low price of the Kindle Fire HD and Kindle Fire HDX.

Both can be found around the same price, and with higher-powered internal components.