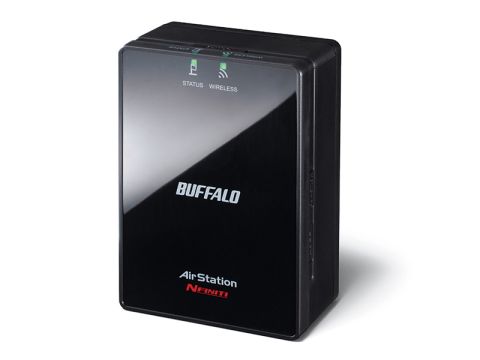 The Buffalo AirStation WLAE-AG300N works in three ways. The first is to add an additional wi-fi access point if there are 'black spots' in your home. Here, an Ethernet cable is run from your router to where the additional coverage is required.

In the second mode, two WLAE-AG300Ns act as a wireless 'bridge' between two existing wired networks.

Finally, there's the ability to connect non wi-fi devices to a wireless network, by running an Ethernet cable from the WLAE-AG300N to the device.

Two Ethernet ports ensure that a pair of networked devices can be simultaneously connected and thus converted to wireless operation. It's also very easy to use and configure and supports DHCP.

A web interface (which would be accessible to Mac and Linux users) allows you to subsequently change parameters including SSID/ network name, encryption mode (WEP, TKIP and AES are all supported, as the ability to enter your own key) and radio mode.

Another good feature is a technology known as AOSS (AirStation One-Touch Secure System) which aims to speed up the setup of secure wireless connections. We had no problems with performance, either. Streamed audio and video alike were free of glitches.

Initially, the WLAE-AG300N will set the radio mode automatically using DFS (Dynamic Frequency Selection) to determine the best band and channel. Where there is a lot of 2.4GHz wireless activity, it might select a 5GHz channel. If this occurs, you won't discover the Buffalo access point with older gear. But you can easily fix this via the web interface.