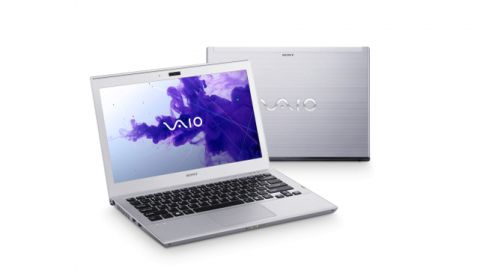 Sony may be late to the Ultrabook party, but it's sure to make quite an impression with its debut device - the Sony Vaio T13.

Not just because the first Ultrabook-branded Vaio machine looks like an incredibly desirable bit of tech. But, because Sony has managed to cram in a decent hardware setup and a wealth of features into a stylish slimline chassis that comes in comfortably inside £700/$1,000.

This Sandy Bridge-configured Sony Vaio T13 isn't the cheapest Ultrabook that we've seen - that honour belongs to the Novatech nFinity 2367 Plus - but the Sony Vaio brand carries so much weight that we're delighted to see it priced as it is.

But while the price tag is fairly low, the design and build is anything but. Despite it not being as sleek as the Dell XPS 13, as pretty as the Asus Zenbook UX31, or as feature-ridden as the HP Envy 14 Spectre, the 13.3-inch Sony Vaio T Series is a seriously slick machine with a robustness and sharp finish unlike any other Ultrabook we've seen.

At 17.8mm thick, and with a weight of 1.6kg, the Sony Vaio T13 is certainly not the skinniest Ultrabook on the catwalk, but its square, almost industrial edges set it apart from its rivals. A MacBook clone it is not - although that's a crime that more than one of the Ultrabook brigade are guilty of.

The housing is made up of a mix of aluminium and magnesium alloy, with the lid's brushed aluminium finish creating an instant sense of excitement.

The all-over silver design scheme helps to create an industrial and rugged impression for the Sony Vaio T13. And this impression isn't misleading either - the lid and screen, while thin, are plenty sturdy, and it should be safe enough in your bag for a day out and about.

This £679 version of Sony's first foray into the Ultrabook market is packing a second generation Intel Core 13 processor in the UK. There are third generation Ivy Bridge versions now available but these will cost you at least £100 more. So, because of its appealing price-point, we feel that this particular model deserves a standalone review.

We will, of course, bring you a comprehensive review of the Ivy Bridge-powered Sony Vaio T13 Ultrabooks in due time.

Powering the Sony Vaio T13 that we reviewed was a Sandy Bridge i3-2367M dual-core processor clocked at 1.4GHz, with Intel HD 3000 integrated graphics and 4GB of RAM. With the Ivy Bridge revolution now in full swing you would be forgiven for having reservations about forking out for an Ultrabook with, essentially, outdated tech on board.

However, if you're on a strict budget then it's worth remembering that the original Ultrabook lineup - including the HP Folio 13, the Samsung Series 5 and, the-Ultrabook-that-isn't-actually-an-Ultrabook, the MacBook Air - all run on Sandy Bridge processors and are more than up to the job.

Running Windows 7 Home Premium Edition (with the option of upgrading to Window 7 Professional for an extra cost), the Sony Vaio T13 boasts a quick response time from sleep mode, thanks to the hybrid storage system made up of a 320GB HDD and a 32GB SSD.

The SSD aspect kicks the Intel Smart Response Technology and Sony's Rapid Wake into action, meaning almost instantaneous wake times. There is a standard SSD option too, which will give you an extra couple of hours battery life - nine as opposed to seven. Our hybrid hard drive review unit managed a fairly ordinary 212 minutes under duress.

A strong point of the Sony Vaio T13 is its connectivity options, which include a raft of 'legacy' ports. There are a couple of USB ports on the left-hand side, one of which is of the faster USB 3.0 variety, and on the right-hand side of the machine there is a VGA port, an HDMI port, an Ethernet option and a 3.5mm jack for your headphones or speakers. There's even a multi-card reader, as well.

In terms of wireless connectivity, you're presented with 802.11 b/g/n Wi-Fi and Bluetooth 4.0. Ultrabooks are great for digital media, social networking and keeping in touch while on the go, and the Sony Vaio T13 is no exception to this rule.

The built-in webcam is HD, has 1.3 megapixels and is powered by Exmor for PC. Exmor is a technology that Sony has used with some of its CMOS image sensors for its digital cameras, including the excellent Sony RX100, and we're told the inclusion "ensures sharper details, higher contrast and rich colours" and, after giving it the once over, we can't argue with that.

The Sony Vaio T13 had no issues playing back HD video from a range of file formats, and the sound quality is particularly strong for such a slim notebook as a result of the xLOUD and Clear Phase technology onboard - so it's more than acceptable as a media-based machine.

The 13.3-inch display isn't the greatest though; the semi-gloss finish is quite reflective, and viewing angles aren't fantastic.