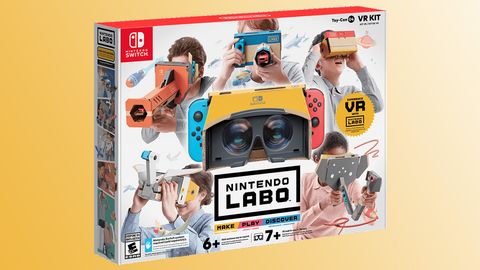 As a toy that encourages healthy screen habits, and offers many hours of varied play, Labo is a truly unique offering in today’s gaming market – and that’s especially true of its VR expansion.

Nintendo Labo was a curious expansion for the Nintendo Switch: the range of peripherals made of cardboard that you assembled yourself over several hours bucked conventional ‘plug in and play’ wisdom, and made a case for parents wanting to do something interactive with their kids rather than parking them in front of the television.

You can read our in-depth thoughts on the original kit in our Labo review; here we’re testing out the latest expansion pack: the Nintendo Labo VR Kit.

Aimed at ages 7+, and turning the Nintendo Switch into a bona fide virtual reality console, the VR Kit is a winning combination of learning, crafting and play that bridges physical and digital gaming. But how does Nintendo put cardboard and VR together, and why does it work so well?

Using a set of cardboard ‘VR Goggles’ as a starting point, the VR Kit lets you (or, more likely, your kids) sample a number of simple VR games and demos, with the goggles fitting inside a cardboard Elephant, Wind Pedal, Bird, Camera, or Blaster, each of which needs to be crafted separately to unlock different varieties of games.

There are several sheets of cardboard for each accessory, out of which you pop the required components before folding and fitting fit and fold them together. Crafting takes anywhere between 30 minutes to three hours, depending on how dextrous you are, though with kids especially we recommend you plan for the upper end of those estimates (see box right).

There are also a host of stickers, pieces of foam, and even rubber bands for creating some of the more complicated accessories. The Labo pieces manage to be both flexible enough to craft and rigid enough to work as it should, and it’s amazing to piece it all together and not have the cardboard not fall apart in your hands; after a couple of hours fitting tabs into gaps and following the Switch’s jazzy instructions we had a cardboard elephant in our hands, with rubber bands keeping the trunk upright and flexible, and we felt pretty proud of ourselves.

It helps that the instructions are so thorough. The Switch runs you through each step with a video you can pause, fast forward and rewind with ease, meaning you’re not struggling to keep up with what’s going on, while you can zoom in and rotate the on-screen Labo model in 360 degrees. It’s brilliantly easy to see what needs to go where, without having to grapple with 2D instructions on paper for what’s fully a 3D process.

There aren’t really any backup parts though, so if you manage to tear some cardboard or lose some IR stickers, you may end up having to cannibalize parts from other accessories in the box. The rubber bands at least shouldn’t be hard to replace if you lose any, though the design specifications work best with a specific size.

Unsurprisingly, crafting the whole box will take up a lot of space, so we wouldn’t blame you for sticking to the Starter Set ($39.99 / £34.99 / AU$59.95) which contains just the VR Goggles and Blaster, instead of the whole VR Kit ($79.99 / £67.99 / AU$119.95). You can also get an expansion pack with the Bird and Wind Pedal, though it makes financial sense to get the whole lot in one go if you want to get more than a couple of afternoons of crafting out of your purchase.

There are three stages to enjoying Labo, and you may well find that you’re drawn to more to one than the others. The first is ‘Make’, which deals with the actual crafting; the second is ‘Play’, where you actually put your creations to use; and the third is ‘Discover’, where you learn more about how the Joy-Con controllers and cardboard peripherals work together.

In play, the games themselves are hugely straightforward, and sidestep the usual issues VR has with motion sickness or in-game travel by generally sticking to a fixed camera angle, while also keeping you seated – you’ll be painting 3D sculptures, jumping over colored balls and smashing toy trucks without running around and knocking into the furniture.

Each accessory, or ‘Toy-Con’, as they’re called, offers a unique input and its own selection of VR games. The Camera will see you taking snapshots of cuddly animals or marine life, while the Elephant’s trunk can become a hose or a paintbrush. The Bird and Wind Pedal can work alone or as a pair, offering a neat reward to those with the patience for building the whole set.

Each Toy-Con is brilliantly realized, down to tiny details like the cardboard ‘clicking’ with the camera zoom, or the Blaster reloading when you pull the barrel towards you.

Some of the inputs seem more random than others, though. Why the Elephant trunk should be best suited to a game of cascading marbles isn’t immediately obvious – when you have your head stuck in VR, anyway, what does it matter if it’s an elephant’s trunk or a regular controller?

The VR Goggles have the most games available to them, and, as mentioned are the starting point for the rest of the accessories. Nintendo could have probably designed all the games to work with the standalone Goggles, though it would have been a lot less fun – and the lengthy crafting process for each Toy-Con is what makes the games themselves so gratifying to play.

Discover feels like the most radical part of the kit, purely because it’s so unashamedly educational. You meet a cast of friendly cartoon characters who talk you through how to use each Toy-Con controller, from what button to press and which gestures to use, to the basics of depth perception and infra-red sensors. It’s very low-pressure learning, but as an engaging introduction to basic science concepts, you couldn’t do much better.

The starter’s guide to using the Labo VR Camera helpfully told us to hold the lens from the underside, and it’s already improved our real-life camerawork (see below).

Labo’s Garage Mode level editor returns here too, allowing you to craft your very own levels in VR.  This is probably the most complex part of the package, and requires more thought than the other VR modes, but for older kids it may be the first step on their journey to working on a mainline Mario game in 2030. As a creation tool, the Garage tool also adds potentially endless hours to your Labo experience (though you have the equivalent with every Labo kit).

One of the most impressive things about the VR Kit is its restraint around long play sessions. VR can be quite taxing, even for adults, and the Switch will regularly suggest breaks during both crafting and between VR games. The first Camera title you can try sees you underwater taking snapshots of different fish, and will pull you out of the game after you’ve taken three pictures so you don’t hang around down there for too long.

This is because the Switch’s resolution is only 1280 x 720 pixels, which is then halved to 640 x 720 for each eye in VR mode. For comparison, the HTC Vive headset has a resolution of 1080 x 1200 per eye, while even on the budget Oculus Go it’s 1280 x 1440 per eye. Lower resolutions tend to cause headaches or motion sickness in VR, and the Switch only really gets around this by sticking to very simple shapes and objects in its VR games.

This is the main reason why the VR Kit isn’t suitable for children aged six or under, and you should make sure your kids don’t spend too long playing in VR with breaks. We also don’t recommend you try the VR modes for Super Mario Odyssey or Legend of Zelda: Breath of the Wild while wearing the goggles (the games weren’t designed for VR and the experience is overwhelmingly nauseous).

The experience is also more isolating compared to other Labo kits. After crafting, you’re spending all your time in VR wearing the goggles – by yourself – meaning you won’t be throwing your arms around as much as in the Labo Robot Kit (giant robot!), or sharing the social experience of driving and flying around with your friends with the Labo Vehicle Kit (racing!).

If you want the most social experience possible from your Labo purchase, the VR Kit probably isn’t for you – though the VR capability is truly unique in today’s toy market, and Nintendo has done a fantastic job of implementing this in a fun and straightforward way, even with the Switch’s underpowered hardware.

Other VR headsets to consider

If you’re looking for a VR experience that isn’t for kids, you’re probably better off with a dedicated VR headset, rather than Nintendo’s cardboard workaround. Oculus has recently released the Oculus Quest ($399 / £399, around AU$730), a standalone headset without any trailing cables or consoles, while the Oculus Rift S and HTC Vive offer more high-fidelity VR experiences, and the PC power for serious gaming. All of these will cost more than the Labo VR Kit: the Quest and Rift S start at $399 / £399 (around AU$730), while the Vive comes in at $499 / £499 (about AU$615).

In its form, the Labo VR Kit is closest to Google Cardboard, which only costs $15 / £15 (around AU$20), although Google Cardboard isn’t good for much more than simple VR demos on a smartphone.

The Nintendo Labo VR Kit is an impressive foray into virtual reality by the games company, using tactile cardboard creations as the perfect starting point for VR.

The VR Kit isn’t as social or large-scale as some other Labo kits, but the lengthy crafting process is the real joy here, and Nintendo is careful to remind you not to spend too long in the headset. As a toy that encourages healthy screen habits, and offers many hours of varied play, Labo is a truly unique offering in today’s gaming market – and that’s especially true of its VR expansion.