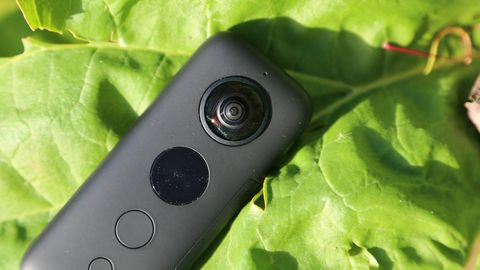 It may be a 360° camera, but this uniquely talented shooter is at its best when producing trick-filled traditional videos.

Producing great video is about two things; capturing the action, and slick editing. So what if you could do both with an action camera and an app? With dual fisheye lenses and some unique time and perspective-manipulation special effects – such as slow-mo, scene-freezes and time-shift – the One X is making a play for the title of most full-featured action camera around. Is it just a 360°-shooter? Although the One X is definitely capable of 360° video, it’s far less about VR and more about just producing great widescreen videos.

Forget 360°; the One X has some unique features not available on any other action camera. However, it's first worth comparing one of its key features – that 5.7K resolution – to others in the market. For comparison, the GoPro Fusion has 5.2K, and Insta's previous effort, the Insta360 One, managed only 4K. However, Insta360’s other rival, the Yi 360 VR, also boasts 5.7K.

Something the One X has that the others don't is many more frames per second. It shoots 5.7K at 30 fps, 4K at 50fps and, crucially, 3K at 100fps. That latter skill enables the One X's two key special effects features; Cinematic Slow-Mo and Time-shift, which let you slow-down or speed-up moments in your finished video. It’s also got bullet-time – that Wachowski Brothers-style wraparound shot popularised in The Matrix movies – though to create that involves swirling the One X around your head.

The One X also claims HDR for both still images as JPEG or DNG raw, which each have a resolution of 18MP, and for video. Perhaps more importantly, the One X also boasts FlowState, a new image stabilisation tech that was also on the Insta360 One, and is a huge success on the GoPro Fusion. It essentially does away with the need for a gimbal by stablising video to the horizon. It’s devilishly effective.

Another feature that continues from the One to the One X is live streaming of 360° video, which is something the GoPro Fusion lacks. We’re not convinced this is a feature anybody uses.

No matter, because on specs and price alone, the Insta360 One X appears to be the king of 360° cameras; it beats the GoPro Fusion on price, and beats both the Fusion and the Yi 360 VR on features.

Rather than a tweak to the design of the Insta360 One, the One X has undergone a complete redesign. It's actually a shade larger than its predecessor, though compared to the chunky GoPro Fusion it still seems pocket-sized. At 115g it's almost half as heavy as its main competitor, and a good third lighter than the Yi 360 VR. What that does mean is it has a pretty small battery. Inside its 115 x 48 x 28mm chassis is a 1,200mAh, which doesn't compare well to the Fusion's 2,620mAh or the Yi 360 VR's 1,400mAh. However, at least the battery is removable, unlike on the previous version. On one side is a naked micro USB slot for recharging, while on its undercarriage is another unprotected slot for a microSD card alongside a standard 1/4-inch tripod thread.

Although it can, therefore, be used with any tripod, also available is a ‘invisible’ selfie stick that can be extended, and itself can be connected to any tripod. In a neat trick, the One X stitches it out of any footage you use it to create.

In the box is a battery, a protective pouch designed to hang around the neck, and cables to connect the One X to USB slots for recharging, but also to Android and Apple phones for the manual transfer of files. Wiring-up for file transfer does save on battery compared to relying on the app and WiFi, but it doesn't save much time.

Like the Fusion, the One X can be controlled completely manually using two buttons on its front in conjunction with a tiny LCD screen. That's really useful because attaching to it via WiFi from a phone does drain the battery (of both the One X and a phone).

However, this camera isn't waterproof like the GoPro Fusion, not unless you purchase a Venture Case, a splash-proof tough shell designed for above-water shooting, which can also be taken 5m underwater. Insta360 also sells a Dive Case, which features dome lenses that allow for underwater shooting to depths of 30m.

There are a lot of decisions to make before you start filming with the One X. Want 5.7K or 3K resolution footage? Since the latter boasts 100fps slo-mo, you have to make a call on whether to trade-down on the resolution to trade-up on that special effect.

Operating the One X is easy, though one issue we did have was the on/off button, which is all too easy to accidentally press when handling the One X. In terms of hardware, the only other issue is battery life. In our tests, the battery lasted about 60 minutes with Wi-Fi on, which means it must be more efficient than the GoPro Fusion, which has a battery life only very slightly longer despite having a much larger battery.

As the special effects suggest, the real choices are made once you’ve captured the raw 360° footage. During our review there was no working desktop software for video (it was in beta testing, and coming soon, though the old Insta360 One software handles photos), so we had to rely only on the app. It’s full-featured and lets you complete all the advanced tasks, but editing video does mean physically transferring it, either over WiFi (takes an age, runs down the battery) or via a supplied cable for Android or iPhone (which takes ages, and also runs down the battery).

Once on your phone the suite of edits and special effects within the app are mesmerising. You can manually tweak image settings including ISO, exposure value, white balance and shutter speed, but the app also allows for multi-clip editing.

For starters, the app converts photos into HDR mode, which is time-consuming, but visibly increases the dynamic range.

The stabilisation on the One X is excellent; you can do anything with it and the footage is always comfortable to watch. It’s gimbal-level brilliance that’s easily the equal of the GoPro Fusion. With fluid footage to work with, the more flashy editing features then help you to easily produce traditional, but unique-looking widescreen videos.

For example, you can manually insert Pivot Points when you want a cutaway shot, while SmartTrack lets you select a subject – perhaps someone walking in front of you, or a building – for the footage to follow. It works best for things that are quite big in the shot, so either large structures or people close to the camera. You can do this just for sections of a video.

Ditto slowing down and speeding up chunks of a video. You can also mark the best parts of the sequence, which the software will link using smooth pans. In fact, everything can be done in the app, including cropping videos and taking still images from videos. You also get the usual 360° format favourites, such as ‘little planet’ or fish-eye. With the One X, the creative possibilities are endless.

It’s also worth mentioning that the One X puts out its own Wi-Fi network, but the app attaches to it using Bluetooth, which makes it quick and trouble-free experience (unlike on the GoPro Fusion).

What we love about the One X isn't its 360° tricks at all, but how easy it is to produce a great-looking regular widescreen video. Kudos in particular to the silky smooth image stabilisation, to the ‘invisible selfie stick’, to the SmartTrack feature, which together makes action camera videography much easier. We really liked being able to speed-up and slow-down footage in chunks, something that makes otherwise pretty dull ‘i was there’ videos into time-lapse-style snapshots that can be watched quickly and shared easily. On the flip-side, it’s not waterproof, the battery is poor and it’s a quarter more expensive than the Insta360 One, but this attempt at a consumer-style 360° camera ends-up also looking like a tempting proposition for semi-pro videographers after some unique special effects on-the-fly.