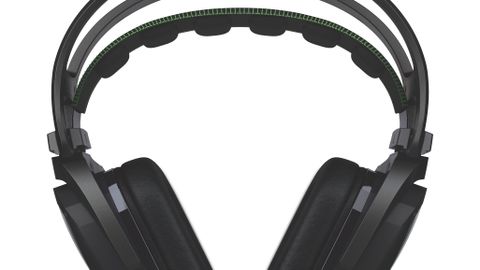 Razer's Tiamat 7.1 is a great audio addition to your PC gaming setup.

Sporting some of the best bass we've heard in a gaming headset, incredible audio quality, and 7.1-channel surround, Razer's Tiamat 7.1 is a great audio addition to your PC gaming setup.

Sporting some of the best bass we've heard in a gaming headset, incredible audio quality, and 7.1-channel surround, Razer's Tiamat 7.1 is a great audio addition to your PC gaming setup.

Before plunking down that $179.99, you'll need a soundcard that supports 5.1- or 7.1-channel surround. We tested the Razer Tiamat 7.1 Gaming Headset with a liquid-cooled Cyberpower gaming PC replete with a Creative Sound Blaster Recon 3D Fatality soundcard. The soundcard sports 3.5mm audio jacks for the front, rear, surround, and subwoofer. Because this setup is essentially analog, simply plugging the cables into their respective jacks was all the setup that was necessary.

Once the Razer Tiamat was set up, we tested them on a variety of different head sizes, from the relatively small to the disgustingly large, and everyone remarked at how comfortable they were. Compared to the Creative Sound Blaster Tactic3D Wrath Wireless Gaming Headset (which can feel pretty tight) with the Razer Tiamat, you could barely tell that you were wearing it.

The large earcups are lined with a form of synthetic leather, but unlike other headsets we've tested, these cans didn't get sweaty and gross after long gaming sessions. Additionally, the comfort we experienced with the Razer Tiamat 7.1 may be due to how Razer constructed the headband. Below the hard plastic headband that supports the earcups is a soft rubber and synthetic leather inner headband that is connected via a suspension system. While this makes the Razer Tiamat 7.1 very comfortable, it gives the headset an enormous profile.

Being a gaming headset the Razer Tiamat 7.1, obviously, has a boom mic. We liked that the boom mic can be tucked away discretely inside of the left earcup for those times when you're listening and not talking to your gaming buddies.

We tested the Razer Tiamat with a variety of PC titles including Diablo III, Star Wars: The Old Republic, and Battlefield 3 and while the 7.1-channel audio couldn't really compare to a surround sound speaker setup, it was the best 7.1-channel experience we've experienced with a headset.

The well-designed inline control module makes it easy to control everything. The cables that connect the module to the PC are plenty long so you can simply connect them and then place the module in a convenient location. Additionally, the cable is also long enough that you can even tuck the module itself away discretely. Speaking of the cable, we really liked the durable braided variety that Razer included with the Razer Tiamat 7.1 Gaming Headset.

If there's a downside to the Razer Tiamat 7.1, it's that they cost $179.99. Other than that, any respectable PC gamer will no doubt be happy with this headset.