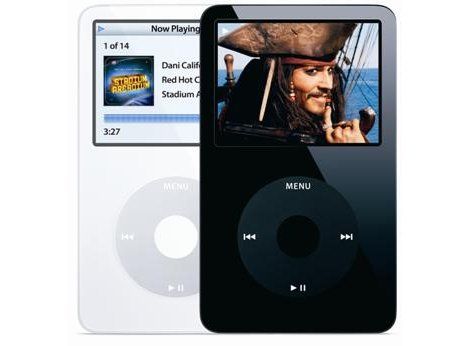 Skimps on features, but wins on sheer quality

This is the state of the art as far as iPods get. In almost all respects, this is the same as the fifth-generation iPod released in 2005, and commonly known as the iPod Video.

Last September saw a slight revision, most significantly a much better, brighter screen that means it's now possible to realistically watch a video on it in anything brighter than a cave during a power cut. This larger model - a cheaper 30GB version is also available - is something of a milestone for player capacities at 80GB, and a real draw for audiophiles who like to have their music at the highest bitrate possible.

In either model, it's a truly lovely object, with the optional black colour arguably the most pleasing, just because of years of overexposure to white iPods. It's incredibly thin, too - even the 80GB model is only about half the width of the Creative Vision M. On sheer build quality alone, it immediately catches the eye.

In practice, it's a mixed bag. There's nothing at all wrong with the player or its interface, but it's pretty apparent that being easy to use overrode all other design decisions.

So, the menu system is oversimplified almost to the point of blandness and there's no FM radio or recording like almost all its rivals. On paper, this seems to be a black mark against the iPod, but doing without them keeps the iPod's price down.

Its video capability is a bit of a non-event. In the US, you can buy iPod-formatted TV shows and movies direct from iTunes, but maddeningly it's just a few animation shorts and music videos over here.

iTunes won't convert most other video formats, so you're down to free third-party software such as Videora or splashing out on Apple's own Quicktime Pro if you want to re-encode existing videos.

So, for now it's still much more a music than a movie player, although the more morally dubious will find that the huge popularity of the iPod means there's a vast array of suitably preformatted video available from the Internet's various hives of scum and villainy.

As a straight music player, it's pretty hard to fault. It looks good, sounds above average (the Vision M is a little punchier, but you need to listen closely to notice) and is unrivalled in its ease of use. The days of the unreasonable Apple surcharge are gone, too - the iPod is exceptionally well priced, given its place at the head of the MP3 table.

The greatest drawback ends up being the desktop software, the famed iTunes. It's head and shoulders above everything else in terms of friendliness and ease, but it's really restrictive. No copying music back from the player to the PC for you, bucko.

It'll even delete any tracks on the iPod that it can't find on the PC if you leave it set to automatic synching. There's ways around this - such as the brilliant free app Yamipod - but a music player as superb as this is crying out for more versatile official software.