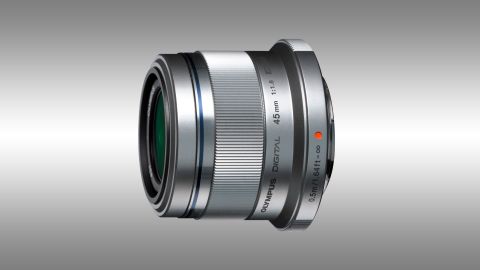 This is not one of Olympus's top flight lenses, and is reflected in the plastic barrel and lack of a manual focus clutch ring, but its optical performance is remarkable for the money.

We've mentioned before that the 2.0x crop factor of the Four Thirds system makes it tricky to get a tight depth of field, but it bears repeating. While a lens like the Olympus 12-40mm f/2.8 (also reviewed) can give you a moderately tight DOF towards the long end of its zoom range, you can often feel that it doesn't go quite far enough for portraiture. At more than an f/stop wider, this 45mm f/1.8 lens gives a slightly longer 'effective' focal length of 90mm, while also making a much better job of minimising DOF. As such, it's an ideal lens for shooting head-and-shoulders or half-length portraits, when you want to make the subject stand out against a nicely blurred background.

It's a 'premium' rather than 'pro' class lens and unlike most in this test group, has what Olympus calls a 'metal-like' rather than an actual metal outer barrel. As such, it doesn't feel as robust and rugged as most lenses on test, and looks arguably better suited to PEN rather than OM-D cameras. Indeed, interchangeable 'decoration rings' are available to match the colour of various PEN bodies but, sadly, the lens hood is also only available as an optional extra. It's a very lightweight lens, at just 116g, with a compact 56x46mm build and a small filter thread of 37mm. Internally, it features nine elements in eight groups, complete with two HR (High Refractive) elements.

The closest focus distance of 0.5m is easily close enough for even the most in-your-face portraiture. The MSC (Movie & Stills Compatible) autofocus system is very fast and silent in operation. Full-time manual focus override is available via camera settings, but the focus ring lacks the push-pull manual clutch of most other lenses in this test group.

Unlike some fast lenses of this focal length, sharpness is retained very well at the widest aperture, where it only drops off a little towards the extreme corners of the frame. That's not really an issue for portraiture anyway, but the generally good corner-sharpness can be a bonus in other situations where you're using the lens as a fast, short telephoto optic. ZERO coatings aren't applied but the lens is nevertheless quite resistant to ghosting and flare, while colour fringing and distortion essentially go unnoticed. It's outstanding value for money at the price.