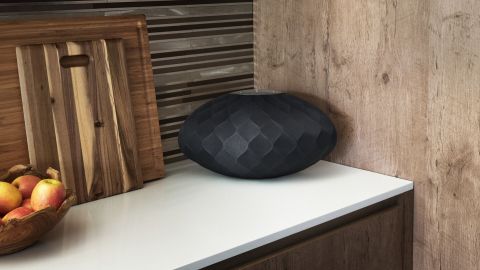 It will divide people with its looks, and it will exclude some people with its price, but the Formation Wedge is Bowers & Wilkins doing what it does best, delivering bold looks and bigger sound.

Back in the day, the B&W Zeppelin was an iconic iPod dock - and then, a bit later, an iconic wireless speaker. But those days are gone - and B&W’s position as leader of the high-end wireless speaker pack has gone with it.

These days, of course, the company prefers to be known as Bowers & Wilkins - and it would very much like its spot at the top of the tree back. To that end, it’s developed a whole new range of wireless audio products called Formation, with (what it claims to be) class-leading multi-room ability in order to do it.

A big part of the original Zeppelin’s charm was its, well, zeppelin-esque shape. With the Formation Wedge, it’s a bit more difficult to come up with comparisons for the design. The overall shape is wedge-y, sure, but other worthy descriptors are ‘part of a lampshade’ and ‘a Christmas tree decoration’.

One thing is for sure, though: you won’t confuse it for any other brand’s wireless speaker when you’re in the showroom.

Bowers & Wilkins says the pronounced elliptical shape of the back panel (it travels through 120 degrees) and the curve of the front allows it to position the speaker’s drivers in a way that gives a much wider spread of sound than the more common ‘straight ahead’ arrangement. The fact that it looks unusual, and dramatic, probably hasn’t done any harm either.

Formation Wedge is available in black or silver finishes - the silver grille is accompanied by a white rear panel, while the back panel of the black grille is an attractive dark wood. The pronounced geometric shape of the grille frame is visible through the acoustic covering, giving the Wedge a multi-faceted, jewel-like appearance - though at 25 x 28 x 26cm (9.8 x 11 x 10 inches), it’s quite an assertive presence.

Unfortunately, however, you’re not exactly spoiled for choice when it comes to getting digital audio files into the Wedge - aside from mains power and a USB socket for servicing and updates, the only physical connection here is an Ethernet socket.

Wireless options are only slightly more numerous. Bluetooth (proper aptX HD Bluetooth, what’s more) is available, as is Spotify Connect. Apple AirPlay 2 is also on the menu, and the B&W is Roon ready - so any files on networked local storage can be got at quite easily too.

The digital information is dealt with by a 24bit/96kHz DAC and then boosted by a total of 240 watts of Class D amplification. This is divided between a five-driver array: two aluminium double-dome tweeters (lifted from B&W’s well-regarded 600 series of loudspeakers, and here decoupled from the Wedge chassis) get 40 watts each, and a couple of FST midrange drivers enjoy the same power. A central woofer takes the remaining 80 watts.

The drivers occupy almost all the space behind the grille, and their layout broadly follows the same shape. The intention is to have sound distributed more widely than a forward-firing arrangement can manage, while still offering a solid and convincing stereo image.

Control of the Wedge is similarly minimal. There’s a touch-panel on top of the device, awoken by a proximity sensor and covering ‘play/pause’ and ‘volume up/down’. There’s an equally brief control app, which is useful for running through initial set-up, fiddling with bass and treble EQs, and organising multi-room groups. Every other eventuality must be handled by the app of the streaming service (or what-have-you) you’re running on your phone or tablet or laptop.

Although this is a review of a standalone product, it’s worth mentioning the lengths to which Bowers & Wilkins has gone to make Formation an impeccable multi-room proposition. Once set up, all Formation products sit on a bespoke wireless mesh (rather than your wider home network) which, along with some flagrant overspecification of Wi-Fi antennae, allows B&W to quote a sync-time between rooms of less than one microsecond. Music from a Formation system, then, can follow you around your home absolutely seamlessly.

The painstaking driver arrangement certainly pays off: Sound is spread far and wide, without becoming vague or ill-focused, and there’s enough outright power to fill even quite large rooms with sound. While it’s always apparent where the music originates, there’s a much less pronounced ‘sweet spot’ than some less capable wireless speakers generate - and so the Wedge is an enjoyable listen no matter where you are in relation to it.

As well as the potential for sheer scale, there’s also great sympathy between the drivers - from the top of the frequency range to the bottom, integration is so smooth as to be imperceptible. And there’s similar unity to the Wedge’s presentation, meaning even difficult tempos and complicated arrangements are handled deftly. The description ‘musical’ might seem redundant in the context of a wireless speaker, but the Wedge is ‘musical’ in a natural, instinctive way that not every rival can match.

Detail levels are high, and control of bass sounds is very impressive - there’s no blurring into a low frequency note, and no droning on the way out. The B&W snaps along, generating real momentum when the music demands it.

It’s only where outright dynamism and, to a lesser extent, musical excitement is concerned that the Wedge doesn’t fully shine: There’s certainly something to be said for erring on the side of caution, especially when some alternative speakers can seem to fall over their own feet in their attempts to prioritise entertainment - but the B&W goes the other way just a little.

It’s never less than engaging and enjoyable, but it’s not the most viscerally exciting wireless speaker you’ve ever heard. And it has a tiny bit of difficulty putting genuine distance between ‘very quiet’ and ‘very loud’ when you’re listening to one of those ‘quiet/loud/quiet’ exercises in dynamic tolerances some folks seem to like.

It will divide people with its looks, and it will exclude some people with its price, but the Formation Wedge is Bowers & Wilkins doing what it does best, delivering bold looks and bigger sound.