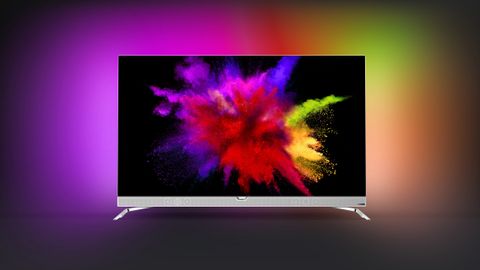 As well as looking beautiful in its gleaming metallic finish, ultra-thin profile and spectacular ‘Ambilight’ halo, the 55POS901F/12 takes advantage of excellent video processing to deliver the all-round best picture quality OLED technology has given us so far.

Having poo-pooed OLED TV technology a couple of years back on the grounds that it wasn’t bright enough to display high dynamic range (HDR) pictures properly, Philips has apparently had a change of heart. For parked on our test benches like a TV Ferrari is the Philips 55POS901F/12: a gorgeous looking 55-inch TV built around an OLED panel.

Why has Philips suddenly warmed to OLED? Because OLED manufacturer LG has improved the brightness OLED panels can produce much faster and much further than Philips had anticipated. So now the feeling is that HDR’s ‘need for nits’ can be met by an OLED TV without compromising the technology’s traditional black level/contrast strengths.

In fact, having decided to embrace the technology, it’s fair to say Philips has gone all out with its debut OLED TV to try and set it above and apart from LG’s OLED sets. Has it succeeded? In many ways, yes, it absolutely has.

Although it doesn’t look quite as futuristic as LG’s E6 OLED and G6 OLED TVs, the 55POS901F/12 is seriously gorgeous. A beautifully opulent silver metallic finish combines spectacularly with a super-thin frame, an insanely skinny rear (except for a section at the bottom), and last but not least, the literally luminous joys of Philips’ Ambilight technology.

If you’re not familiar with Ambilight, it uses a series of LED lights built into the screen’s rear to produce halos of colour that spread beyond the TV’s edges. The system can now deliver a huge range of colours that can, if you wish, match with remarkable geographical and tonal accuracy the colour content of the images you’re watching.

Not surprisingly Ambilight can be a bit of a distraction if you’re not careful. Run it on fairly subdued settings for brightness and responsiveness, though, and it genuinely enhances your immersion in what you’re watching, as well as reducing eye strain during lengthy viewing sessions.

If there’s one aspect of the 55POS901F’s design that might cause a problem, though, it’s the way its legs fasten under each corner of the TV – you’ll need a bit of furniture that’s at least as wide as the TV.

Design TL;DR: The 55POS901F/12 is yet another gorgeous OLED TV - especially with Philips Ambilight technology set up right.

Unfortunately we're not a big fans of either.

The Philips system is low on content, while the Android one is too full of content most people don’t actually want on a TV, the Android platform isn’t customisable enough and is too cluttered and over-bearing in its presentation.

It’s a bit ironic, too, given how many pointless gaming and ‘utility’ apps Android TV supports, to find that the only key UK catch up TV platform the 55POS901F/12 carries is the iPlayer. Also, while the TV does carry Netflix and Amazon apps, only the Netflix one supports both 4K and HDR. At the time or writing the Amazon app doesn’t do HDR, which is a real pity.

Smart TV TL;DR: Android TV confuses quantity with quality, giving you too many apps you don’t want and not enough that you do.

Philips has used its most powerful picture quality engine in the 55POS901F - and it shows.  For starters, the set does a great job of upscaling HD sources to the screen’s native 4K resolution. The sense of extra sharpness and detail is prodigious, getting arguably closer than any other TV (bar, perhaps, Sony’s Z9D) to making HD look like 4K.

As with other recent OLED TVs, the 55POS901F is capable of reproducing standard dynamic range content from Blu-rays, DVDs and broadcasts with outstanding accuracy and finesse. Natural, finely graded colours combine with a rich sense of contrast underpinned by the gorgeously deep, even black colours that are OLED’s trademark. Actually, the 55POS901F performs even better during dark scenes than LG’s OLEDs, thanks to superior control over very low light levels that stops dark scenes suddenly turning grey, and helps the image retain more shadow detailing.

The 55POS901F scores another advantage over rival OLED TVs, too, by offering up an SDR to HDR conversion option that actually works. The key to its success is that it’s sensible in its scope, not trying to expand either the image’s contrast or colour ranges too aggressively. While the results don’t really get close to the ‘shock and awe’ of a true HDR image, they avoid the gaudy, forced look commonly seen with SDR-to-HDR systems.

HD/SDR Performance TL;DR: The 55POS901F does an unusually good job of both upscaling HD to 4K and upgrading SDR to HDR.

The 55POS901F also delivers more detail in both its darkest and brightest HDR areas. This is because it suffers less with ‘clipping’ of tonal infomation in the brightest areas, and retains more subtle greyscale and shadow detail information in the darkest areas. These are both critical elements in delivering a convincing HDR image.

The impressive finesse with which the 55POS901F handles dark areas also stops them looking as over-dominant as they can with rival OLED TVs. We were relieved, too, to see no trace of the black blocking noise seen with some LG OLED models. Philips also manages to deliver subtle HDR colour transitions without suffering the speckling, purply noise that can affect such picture areas with LG OLED TVs. These clean colour transitions are achieved despite the fact that the 55POS901F delivers colours that appear at least as rich and wide ranging as those you get when watching wide colour gamut content on LG’s OLED TVs.

The 55POS901F does a superlative job, too, of getting the absolute maximum impact from the huge detail levels found in native Ultra HD/4K sources. Anyone who still doubts whether 4K can really make a difference on a ‘mere’ 55-inch screen will need just seconds in the company of the 55POS901F to realise the error of their ways.

Contributing to this excellent 4K clarity is some clean motion handling, especially if you use the surprisingly effective and artefact-free Perfect Natural Motion system on its lowest power setting. We also surprised ourselves by tending to use the Ultra Resolution option, which somehow makes 4K images look even higher than 4K in resolution without causing grain or halo artefacts around fine edges.

By the time you’ve added to the 55POS901F’s heady 4K HDR picture mix OLED’s ability to be watched from wider angles than current LCD TVs without losing colour and contrast, you’re talking about an OLED picture that’s the best I’ve seen so far. It’s a pity, perhaps, that the 55POS901F doesn’t join the LG OLEDs in supporting the Dolby Vision HDR system. It’s worth adding here that Philips has confirmed that the 55POS901F can be upgraded to handle the upcoming HLG HDR broadcasting format once it starts to appear.

For all their brilliance, however, the 55POS901F’s pictures aren’t perfect. It occasionally shows evidence of striping in some areas of fine colour when watching Ultra HD Blu-rays, for instance.

Also, even Philips’ processing can’t disguise the fact that the best LCD TVs can deliver more than twice as much brightness, opening up the volume and naturalism of HDR/wide gamut colours in a way the 55POS901F just can’t.

Of course, the 55POS901F counters its brightness shortcomings by delivering dark picture areas with a depth, uniformity and naturalism that not even the best LCDs can compete with.

4K/HDR TL;DR: The 55POS901F’s 4K HDR images combine stunning dynamism and sharpness with a deftness of touch and freedom from noise that makes them the best OLED images we have seen this year.

While the speaker bar attacked to the 55POS901F’s bottom edge doesn’t sound quite as well-rounded and punchy as the soundbar built into LG’s E6 OLEDs, it’s still a healthy cut above the average flat TV sound system. Details are clean and plentiful, voices are well rounded and clear, and you can enjoy plenty of movie-friendly volume before there’s so much as a hint of fizzing, crackling or other distortion from the clearly high quality drivers.

The bass doesn’t go quite as deep as we’d ideally like, and while we like the directness of the sound, the soundstage could have done with spreading wider. Overall, though, the audio good far outweighs the bad.

However, that said, the 55POS901F gives the best picture quality, and Philips’ Ambilight technology proves a great partner for OLED’s colour purity. If you’d rather sacrifice some black level precision for a much brighter HDR picture, your best bets for around the same money would be the (10-inch bigger) Samsung UE65KS9500 and Panasonic TX-65DX902.

The 55POS901F makes a stunning first impression thanks to the radiance of its three-sided Ambilight system and the gleaming metallic purity of its bodywork.

It’s much more than just a pretty face, though.

Tucked inside its glowing form is Philips’ most powerful picture engine, and this proves to be a lethal weapon on the suddenly expanding OLED TV battlefield, enabling the 55POS901F to produce pictures that better in a number of subtle but telling ways those of LG’s OLED rivals.

It remains to be seen how much LG and Panasonic’s upcoming 2017 OLED TVs – including the new W7 Signature Series OLED – might raise the picture quality game; certainly they’re promising to introduce another increase in brightness. At the time of this writing, though, the 55POS901F is the best OLED picture performer out there. And that's saying something.