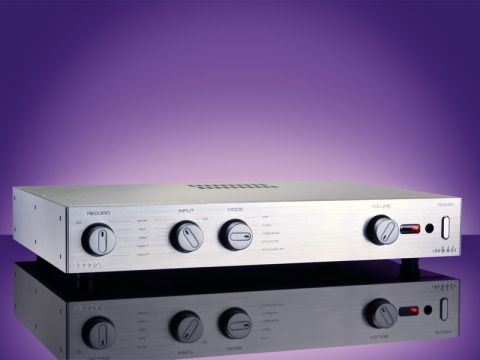 Audiolab: the brand that launched a thousand hi-fi's. Many thousand, indeed. For many years towards the end of the 20th century, the Audiolab 8000A was the integrated amp to own as part of a decent-to-aspirational system and indeed plenty are still doing sterling service.

In many ways it is strongly reminiscent of the hallowed original. The front panel is similar, the proportions are not far off and one strongly distinguishing feature remains in the central internal heatsink, cleverly arranged to vent through top and bottom of the case without allowing too much dust into the amp's innards.

Features differ significantly from the 8000A. There's no phono stage, for a start, which is a shame as that in the 8000A was always one of its big attractions. Audiolab doesn't currently have a single phono-capable product, but there are plenty of decent standalone phono stages around so it's hardly the end of the world.

On the other hand, there is an unusually sophisticated set of mode-switching options. The separate listen and record selectors are always welcome, but the 'Mode' switch provides options which other amps either don't offer, or at best offer with some rewiring and/or reaching round the back.

Some of these modes aren't entirely obvious but with thought it's clear they all have their use. 'Mute' is simple enough and 'Pre-Power AV' separates the pre and power sections, giving the option of connecting a processor between them. But why do we need separate modes for 'Pre', 'Integrated' and 'Pre-power'?

In the last, pre and power sections are connected internally anyway, while instead of having a 'Pre' mode one could simply ignore the power stage. The clever part is that in Integrated mode the preamp outputs are disabled, while Pre-power activates them. Pre disconnects signals to the power amp section. This means that one can have a remote power amp connected which is only active when one wants it to be, while the 8200A's power section can be disabled when one doesn't want to use local loudspeakers.

Yes, some of this could have been done with speaker output switches, but the main thing is that it gives exceptionally flexible control over the amp's constituent parts.

Three line inputs at the rear are joined by three input/output pairs, rather quaintly marked 'Tape 1', 'Tape 2' and 'Video'. Well, recording outputs and associated monitoring inputs, anyway and, of course, you can use any of them for perfectly ordinary line inputs.

The preamp output appears on two pairs of phono plugs and speaker terminals are likewise dualled, for bi-wiring and so on. A full-size headphone socket sits at the front.

In terms of amplifying circuits, the 8200A clearly bears some resemblance to the 8000A though there are changes – among specific points mentioned to us by the designers, the input transistors have been changed to a completely different type, while input switching is managed by relays.

Despite that, the main input selector is a motorised mechanical switch, which may seem bizarre but means that the positive and direct manual input of a front-panel switch is retained while adding the benefit of switching right beside the input sockets, plus remote control. The volume control is also motorised, naturally.

Rated output matches the original exactly at 60 watts. The circuit of the power amplifier section is unusual in the way it applies feedback. So the 8000A was well liked in its day.

But that was then... and it's very much our experience that the baseline of audio electronics performance has risen markedly over the last 20 years. We never expected to find the 8200A a poor amplifier, but we were a little nervous as to how it would fare against modern competition.

In the event, we had plenty of opportunity to try it out alongside amps of all sorts at similar prices and indeed a good deal more, covering various approaches to the sound/features/power balance.

As assured as ever

The short-form result is that the 8200A holds its own. It offers good, solid bass, well extended treble, lively dynamics, detail and all that sort of stuff and while it may not offer them in the sort of style you'd expect of £10,000-worth of pre/power separates, it follows the general 21st-century trend of coming uncomfortably close. Uncomfortably, that is, for anyone who's just parted with £10,000!

Where we really have to hand it to Audiolab's designers past and present, though, is to do with the way that this amp manages all that and still contrives to retain some genuine character of its own. Yes, 'character' can mean inaccuracy, but like many potentially risky things, in very small doses it's a very useful thing.

Basically, this is a very neutral amp. Listen to it for a while, though, and you start to realise that the sound has just a trace of charm that's all Audiolab's own. We first realised this with a familiar orchestral recording, in which we suddenly found our attention drawn in a slightly different direction from usual, more towards the middle-register instruments rather than the melodic violins and flutes or the low strings and heavy brass.

Having noticed that, we then found ourselves appreciating a similar phenomenon in other styles of music. Male vocals certainly benefit, but since in most music the middle registers are very much home to the 'backing', the commonest effect is to make that backing clearer and very slightly more present than before.

That wouldn't be so good if it meant the melody and rhythm sections were being sacrificed, but we never felt that to be the case. What does sometimes happen is that the melody becomes just a shade mellower, less bright and strident and, perhaps, that won't always be to everyone's liking.

Bass, by contrast, is consistently rich and full-featured through this amp, well extended and with good rhythmic drive and an almost palpable texture. But that lower midrange thing is intriguing and was what really had us coming back for more after a few evenings with the 8200A.

It brought home to us just how much information, in how many recordings, exists in that register and gave us renewed pleasure in several familiar discs. Superficially it seems like a tonal aberration, but (apart from the fact that there's no kink in the frequency response to support that) it's more to do with retrieval of detail.

Imaging, too, is particularly fine around that part of the frequency range and that's not to say it's noticeably lacking elsewhere as it's good to very good across the board. High-resolution digital sources seemed to benefit even more than CD, if our rather small sample of them is anything to go by, while LPs (via an external phono stage, of course) were less affected.

Rather usefully, MP3 downloads are typically a touch sweetened up by it, though we wouldn't go quite so far as to call them redeemed.

What's clear, though, is that this amp is just as capable of giving musical pleasure and excitement as its esteemed predecessor was back in the 1980s. Standards in general may have risen, but Audiolab got it basically right in the first place and the new revision merely tweaks performance in line with current products.