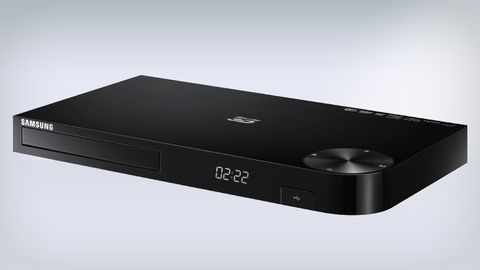 This is a good value Blu-ray all-rounder that features 4K upscaling, a wide choice of apps and playback of a plethora of digital files, but it's the dual core processing inside that most impresses. The BD-H6500 makes a great mid-range option if you're after a does-it-all deck that offers some future-proofing.

What's the most important innovation in home entertainment in recent months?

No, it's not smart apps or 4K upscaling, but the spread of the dual core processor. Happily, Samsung's BD-H6500, which is selling for £129.95 (US£209.99, AUS$169) (though being heavily discounted already) has all of that and more besides, as it makes a bid to be one of the best value smart Blu-ray decks around.

A regular gloss black box except for a heavily curved corner that builds-in a touch-sensitive array of buttons. There's a USB slot on the front alongside a disc tray that spins all kinds of discs – including both 2D and 3D Blu-ray. On the rear is a HDMI output, an optical digital audio output and Ethernet LAN, though the 360 x 40 x 196mm (14.17 x 1.5 x 7.7 inch) BD-H6500 also includes Wi-Fi. DLNA networking and basic screen mirroring for Samsung devices is also included.

Get online and the BD-H6500 feeds apps into its Smart Hub page, which constitutes a remarkably concise user interface.

The Films & TV Shows panel of available streaming video content is perhaps too dominant. It's flanked by a Play Disc window for whatever disc is inside the BD-H6500's tray on one side, and by smaller panels for connected USB/DLNA devices, and Samsung Apps, on the other.

Below runs a few Recommended Apps and My Apps, though oddly no headline apps are included here – in the UK version of the BD-H6500 I found only apps like Facebook, Vimeo and vTuner.

It's a tad underwhelming, and though I managed to dive into a separate grid page of Samsung Apps, there I only found AccuWeather, Facebook and vTuner in Recommended and, in My Apps, just a stodgy web browser alongside Vimeo, Yupp TV, Dailymotion,

YouTube and – once again – AccuWeather. I had to visit the online store to download a few more interesting UK-centric apps, such as the 4OD, ITV Player and Demand Five, as well as Netflix and Amazon Instant. But even when I did that, they simply queued-up behind all of those second-rate apps on the Samsung Apps grid. Fetching the app you want is slow process.

I'm slightly confused as to why the BD-H6500 wants to hide arguably its main attractions. During this review the BBC iPlayer app was missing, though were sure it's simply undergoing an update and will soon return; the BBC News app did just that during the review.

Apps load relatively quickly and navigating the BD-H6500's user interface is speedy. Better still, the BD-H6500 manages to load a disc in about seven seconds. The remote is nothing special, but it's not overcrowded and the disc-specific buttons do glow in the dark, which is a great idea.

Picture parameters can be tweaked if you put the BD-H6500 into User mode (sharpness, contrast and brightness, etc.), though I found the deck's default Movie preset to be excellent.

During playback of a disc there are all kinds of options available within the Blu-ray player itself. A drop-down menu in the top-right corner includes options to change the picture mode (Movie, Standard or Dynamic), select a scene, skip to a chapter or play the disc from the beginning.

Sadly the BD-H6500 didn't play any of the native 'pro-res' 4K MOV files or compressed MP4 versions I had on a USB stick, which is a bit of a shame for a so-called 4K-capable deck (especially as Samsung's 4K TVs manage to play the MP4 versions).

However, the 4K upscaling of Blu-ray does appear to be a feature worth investing in here. Don't expect wonders – the image still looks a tad soft compared to native 4K material – but during our test conducted with a Samsung Ultra HD telly, Gravity looked plenty detailed and really clean.

Motion scenes, such as when Dr Stone spins towards and then past the camera on her way into deep space, look decidedly DVD-like in their softness on a massive 4K TV. I also noticed quite of lot of picture noise in a bright areas of the upscaled footage that aren't there when viewed on a regular Full HD TV. That said, Gravity is highly watchable on a 55-inch Ultra HD screen.

On a regular Full HD or '2K' TV (as we should probably now call them), Gravity in 2D looks fantastic, and in 3D produces contrast-heavy images and impressive depth effects without any trace of crosstalk.