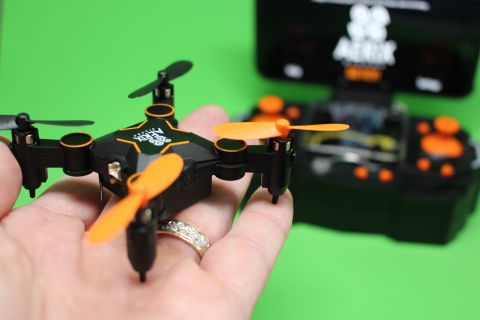 A truly pocket-sized drone, the Aerix Varius is nimble, cheap and ideal as a training unit for budding flyers, but its weak camera, poor stability and lack of range will seriously limit its appeal to seasoned drone users.

Cutting edge drones like the DJI Inspire 2 and Yuneec Typhoon 4K may offer amazing handling and stunning video capture in the air, but they're hardly the most portable of beasts – the Inspire 2 has to be transported in a suitcase-size container, for example. We've seen more mobile examples in recent months – including the Zerotech Dobby – but when it comes to the ultimate in pocket-sized drone flight, you have to go a long way to beat the Aerix Varius.

With its wings folded the Varius measures 2 inches by 2 inches by 1 inch thickness, which makes it one of the smallest camera-equipped drones we've seen so far. But does the Varius sacrifice functionality for its amazing portability?

The Varius is seriously small – it fits neatly in the palm of your hand, even with its four arms folded outwards. The unit houses a 220mAh battery and a 0.3 megapixel camera. On one side is a charging socket, which can be connected to the bundled USB charging cable or – more conveniently – a lead contained inside the optional remote control, which doubles as a carry case when the Varius isn't in use.

You can control the Varius using your phone's touchscreen display but the remote is better for more precise input. It requires four AAA batteries for both charging and usage (an internal rechargeable power cell would have made much more sense), and it takes around an hour to fully charge the 220mAh battery. Twin sticks allow for accurate control, while an array of buttons control aspects such as take-off, landing and 'return to home' functionality. Removable propellor guards prevent damage to the Varius' delicate blades when it's in flight, but the propellers can be easily replaced if need be – in fact, there's a spare set included with the unit.

The Varius isn't the most robust drone we've used, which should come as no great shock when you consider its diminutive size. We certainly wouldn't recommend using it without the bundled propellor guards installed – it's hardly the most stable of units and struggles to hover in the same spot, and it's also susceptible to being blown about in moderate winds and risks hitting obstacles as a result. In terms of operational range, we're talking tens of meters rather than miles – the live video feed cuts out at around 25 meters.

The drone connects to your smartphone via a special app which also gives you a live feed of the drone's camera. The video quality is extremely low-resolution and only really good for ensuring that the drone doesn't clatter into anything – we can't imagine any glamourous international spies will be relying on this to remotely snoop on targets. You can capture footage and snap images if you wish, but don't expect anything mind-blowing.

Battery life is between five and seven minutes, depending on how much effort the Varius is having to put into staying airborne. With a top speed of around 30mph it's quite a nippy little customer, and despite its wobbly nature is fairly nimble and responsive, making it ideal for those who simply want to mess around with a drone and race it through the skies. It can also perform impressive tricks like 360-degree rolls.

The Varius is the most portable, pocket-sized drone we've encountered and at around $65 it's also cheap and cheerful, too. Despite its tiny stature and low cost it comes with a surprising range of features and is relatively easy to get in the air, even if you're a novice user. The fact that it comes with a fully-featured physical remote is a bonus, too.

The small size of the Varius means you're limited to low-level flying, and although it features a camera it's too low-res to be of any genuine use, outside of anticipating obstacles during flight. The optional remote control needs AAA batteries, too – we'd have prefered an internal rechargeable power cell.

The Varius is highly portable, reasonably priced and comes with a pleasing range of features, all of which makes it an appealing choice for drone beginners - but the poor camera, lack of stability and short range won't endear it to serious flyers.