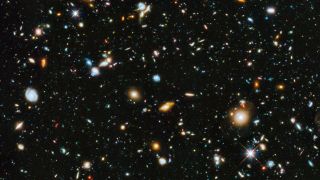 Astronomers at the Lawrence Berkeley National Laboratory in the United States are preparing a fleet of tiny robots to boldly see where no one has seen before.

Collectively known as the Dark Energy Spectroscopic Instrument (DESI for short), 5,000 of the ten-inch-long bots will be installed in the Mayall Telescope at Kitt Peak National Observatory in Arizona in 2018.

Each cylindrical robot will wield a fiber-optic cable with a core just 107 millions of a metre wide, which it'll point precisely at specific objects in the night sky to capture their light. Those objects will mostly be distant galaxies, but also a few stars and quasars.

The hard bit is getting all the robots to move in unison. They'll be so tightly packed together that there's a risk that they'll bump into each other as they spin into new positions, several times each hour.

To avoid this, a scaled-down system of ten robots will be installed this August and September on the telescope. The test, which will be called ProtoDESI, will let scientists tune the accuracy of the robots and the software that controls them.

"ProtoDESI will show us how the software and positioners are working together," said Parker Fagrelius, who is managing the project at Berkeley Lab. "All of the things we learn along the way from ProtoDESI will be built back into the plans for DESI's commissioning."

Once the full system of ten "petals" each containing 500 robots, is complete and installed, it should be possible to work out how fast different galaxies and quasars are moving away from the Earth.

With that data, we'll be able to trace back the history of the Universe in more detail than ever before. It'll also allow us to build a three-dimensional map of the cosmos and probe the secrets of dark energy, which is thought be accelerating the Universe's expansion.

Along the way, we'll improve our understanding of dark matter, the early days of the Universe, and the structure of our own galaxy, the Milky Way.