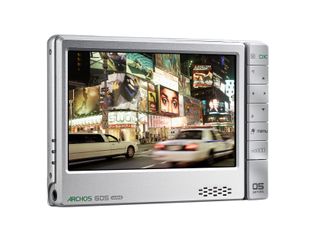 With the new Archos 605, you can download music and movies straight from the web, without the need for a computer

Archos has launched the fifth generation Archos 605 portable media player, which adds Wi-Fi capabilities. Using the wireless connection you'll be able to download music and movies straight to the device.

The Archos 605 features a 4.3-inch touchscreen with 800 x 600 pixel resolution. It can play/display photos, music, movies, videos and TV shows that you've recorded from your TV. It supports flash playback so that you can enjoy videos from the likes of YouTube on the go.

Recording TV shows from a PVR or Sky box is easily done via the docking station. Just slot it in and select the programmes you want to record. There's also a remote control to make the process more seamless, and an EPG to plan recordings.

Archos has also announced its new Archos Content Portal (ACP) from where you can download movies and TV content on the go. After registering your credit card details on set-up, you can download movies with a few clicks of a button. A 30-minute TV show will download in about 20 minutes but you can start watching straight away while the download carries on in the background.

Other new products announced in Archos' fifth generation PMP range include the new 2GB Archos 105, the Archos 405, a 2GB PMP, and the Archos 705 Wi-Fi, which comes in 30GB and 80GB versions.

Archos also announced the PVR-style Archos TV Plus which allows you to record and save programmes in the same way as with the Apple TV. The recordings can then be transferred to the new Archos PMPs for watching when you're out and about.