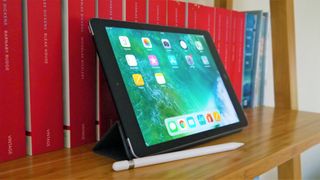 The new iPad 2018 is the cheapest way to get an Apple Pencil-compatible tablet, but you'll still want to safeguard this one because it's not easy to repair.

Apple's six-generation iPad scored a two out of ten for reparability, according to the teardown experts at iFixit. This isn't a first. iPads are notoriously difficult to fix.

The big problem? The team cites strong adhesive holding everything together as the lead issue here. Once you melt the glue to take everything apart, you won't be able to get Humpty Dumpty back together again.

There's good news: while the display isn't slickly laminated to the glass (and you can see an air gap between the two, unlike the higher-end iPad Pro 10.5 and iPad Pro 12.9), that means if you break the glass, you probably won't damage the display.

AppleCare+ is an easy sell for two reasons: repairability is clearly a factor and Apple is not charging a lot anymore for this extended warranty program.

Of course, if your iPad never leaves the home, you may be able to skip this cost entirely and invest in an Apple iPad case.