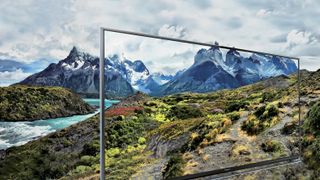 Maintaining the 4K theme established by its FZ1000 camera, Panasonic yesterday announced it would be releasing four 4K televisions in Australia this year, updating its flagship AX900 series and introducing the more affordable AX800 series.

Panasonic claims the new panels deliver colour that is "truly faithful to the original source" thanks to its Studio Master Colour tech, which covers 98 per cent of the DCI colour space.

The panels also benefit from the contrast supplied by 128 local dimming zones, up from 32 zones on past models.

The 4K range is designed to stand without a traditional support, Panasonic preferring the minimalist look of free-standing panels that sit directly on your furniture via a three-degree tilt and rear counterweight.

The range features a new my Stream feature, which collects viewing recommendations based on your habits from a range of sources (YouTube, web bookmarks etc) in a single place.

Panasonic insists this is a feature that can be turned off if your viewing preferences veer towards the unsavoury and you don't want them on display.

A customisable Home Screen interface and the ability to share content from your Android or iOS device (sorry WIndows and BlackBerry devotees) are also present. If you're an Android user you can also make use of the Display Mirroring feature and transfer your device's entire display to the TV in real-time.

Panasonic claims the panels benefit from its new "TV as furniture" approach to design. We're unsure if that means you can now sit on them.