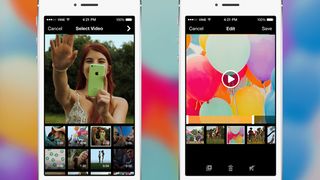 You can now select multiple clips to splice together on Vine

Recording six-second videos on the fly in Vine may have been part of the fun, but as of today the iOS app finally lets users simply import existing videos from their devices.

Previously Vine users had to tap and hold on the screen for a total of six seconds while recording their videos on the fly.

It may take away part of the challenge of making great Vine videos, but it will also probably lead to more content on the service. The company is currently encouraging users to mine the depths of their old videos and publish them using the hashtag #VintageVine.

Slow it down, free it up

The ability to import existing videos into Vine may also make the service more attractive to those who prefer Instagram's less restrictive video feature, which lets users trim, filter and upload up to 15 seconds of footage.

The Vine update also adds new editing tools, like the ability to duplicate specific sections of video or mute certain parts of the audio, and new tools for recording footage, including a grid and a level to help ensure you're shooting straight.

Unfortunately this update is currently available only for the iOS version of the app, though Vine iOS Engineer Richard Plom wrote in a blog post that Android users should "stay tuned" for their version.

"When we introduced Vine, we wanted to make it easier for people to create, share and discover short, looping videos," Plom explained. "As the community continues to grow and more and more people find and watch Vines every day, we are excited to provide people with more tools to express their creativity and make even more, and more awesome, Vines."