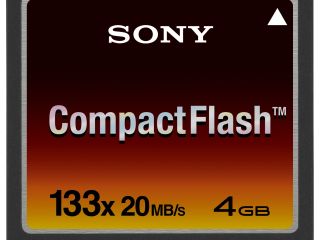 Sony will release its first CF cards this spring

In a surprise move, Sony has announced that it is to abandon its total commitment to the Memory Stick format and begin making its own CompactFlash cards .

Sony's prosumer-level digital cameras have always featured a slot for CompactFlash cards alongside one for the firm's own Memory Stick, but Sony's decision to begin making its own line of CF cards has come as something of a shock.

For the last nine years the Tokyo electronics giant has stuck rigidly to producing its proprietary memory-card format, rather than support a more open standard such as SD or CF.

Indeed, it grudgingly put CF card slots in its high-end cameras, starting a few years back, for two reasons. Firstly, it was targeting photography professionals and serious amateurs who value their robustness and faster write speeds (up to twice as fast as the best Memory Stick).

Secondly, it bought part of Konica-Minolta a year ago and wasn't about to alienate all the customers it acquired there by dropping CF support.

Now, with the rapid shift to multi-megapixel digital SLRs, such as Sony's own Alpha DSLR-A100 , it seems the company has realised it may as well profit from the memory cards such cameras require and so will release its first CF cards this spring. The initial products will be CF Type I cards of between 1GB and 4GB, rated at 66x and 133x transfer speeds and carrying the same Alpha branding as the A100. J. Mark Lytle