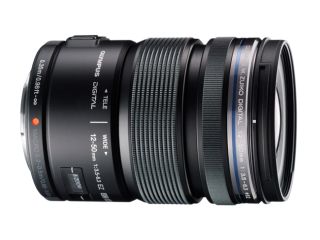 The M.ZUIKO DIGITAL ED 12-50mm 1:3.5-6.3 EZ lens comes with a new ultra-smooth, near-silent electromagnetic zoom mechanism for powering the lens on its own, without the need to twist the lens.

This type of power zoom lens was first introduced by Panasonic for its G-Series cameras back in August.

The new Olympus lens has also been designed with high quality macros and wide-angle shots in mind. Its 24-100mm effective focal range produces an 84 degree max angle of view.

Power zoom functionality allows users to zoom in and out smoothly and quietly at a constant rate, which is especially useful when recording videos as it has the potential to cut down on camera-shake and jerkiness that occurs when zooming by hand, as well as cutting out the noise of motor gears.

Motor zoom speed can be set to one of three levels, with the slow setting allowing time to concentrate on composing, while the fast setting makes sure no shot is missed.

With a multi-layer coating and two aspherical lenses, common zoom lens aberrations have been tackled. In macro mode, Olympus states the lens can offer the 35mm equivalent of 0.72x magnification.

For the first time on a PEN lens, a new L-Fn button has been included. This prevents the camera from accidentally focusing on the wrong subject. If something comes between the camera and subject, the button can be pushed to temporarily suspend autofocus until it has moved out of the way. A manual zoom ring is also included to suspend autofocus altogether.

The lens is fitted with the same dust and splash proof mechanism which was originally developed for high-end ZUIKO DIGITAL Top Pro series lenses.