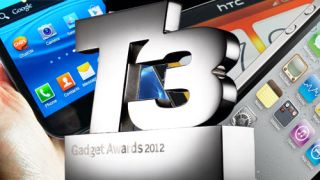 T3 Awards Phone of the Year

TechRadar is sponsoring the Phone of the Year category in this year's glittering T3 Awards, so we thought we'd take an in-depth look at each of the nominees to help you cast your vote.

With the iPhone 5 yet to be officially announced, the iPhone 4S heads up Apple's charge and it will be challenged by the flagship Android phone from Samsung – the Galaxy S3.

HTC's One X has won plaudits this year and is also listed, along with Sony's first post-Ericsson headliner the Xperia S.

Samsung's Galaxy Nexus has managed a place and Nokia will be buoyed to have picked up a placement for the Windows Phone 7-toting Nokia Lumia 900.

You can vote for your favourites at http://www.t3.com/awards.