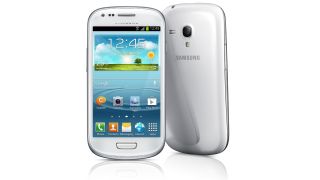 The smaller, less powerful brother to the S3.

The Samsung Galaxy S3 Mini took to the stage in Germany earlier this month, as the Korean firm showed off its follow up to one of the most popular smartphones of the year.

Offering up an easier to hold and slightly more affordable version of the Galaxy S3 sounds like a great idea; however after Samsung's head of communications JK Shin said the Galaxy S3 Mini won't be found wanting in terms of specifications - some may be a little disappointed with the finished product.

The Samsung Galaxy S3 Mini shares the same name as the more powerful Galaxy S3, and the handsets also sport a similar design, with the S3 Mini looking like a shrunken version of its big brother with a similar home button and curved chassis.

However that's where the similarities between these two handsets end, with the Samsung Galaxy S3 Mini not really mirroring the Korean firm's flagship model in other departments.

The Galaxy S3 Mini sports a 4-inch, Super AMOLED display, but don't go thinking it will offer up a crisp, HD picture, as the resolution is 480 x 800 – not awful, but not blockbuster either.

That said, you should be able to comfortably watch movies and play games on the Galaxy S3 Mini without noticing any major quality issues.

It's the same resolution display as the 4.3-inch display on the Samsung Galaxy S2, but that also sported the AMOLED+ technology, giving the handset the upper hand when it comes to colour reproduction and general sharpness.

Good news for Android fans: the Samsung Galaxy S3 Mini ships with the latest build of the mobile platform, cutely named Jelly Bean - offering up buttery-smooth operation thanks to the "Project Butter" upgrade.

This trumps the Galaxy S3 which currently ships with Ice Cream Sandwich, and while an Android 4.1 update has started to roll out in South Korean and some eastern European countries, we're yet to see it hit other major western markets.

Gone are the quad-cores of the Galaxy S3, with the Galaxy S3 Mini sporting a relatively sedate 1GHz dual-core processor, which shouldn't have any trouble running Android 4.1, but it's hardly matching (or even coming close) the power of its bigger brother.

There's also 1GB of RAM to help things along and while power isn't everything in the smartphone world, it does mean the Galaxy S3 Mini is less well equipped in this department than the 1.2GHz dual-core Galaxy S2 and Samsung Galaxy Nexus.

Connectivity-wise the Galaxy S3 Mini has you covered with Wi-Fi b/g/n, Bluetooth 4.0, DLNA and NFC technology, while you also get the choice of 8GB or 16GB of internal storage – which can be expanded by another 32GB with a microSD card.

There's no word on Australian pricing yet, but It looks like the Samsung Galaxy S3 Mini will be available SIM-free for around $500 based on international versions. Mobicity has a placeholder pricing of $549 in place, but that could change after more international pricing is announced.

No Australian telco has yet announced the handset on a plan, but given Australia's love affair with 24 month contracts, expect that to change as the phone appeals to entry level smartphone users.

Samsung is yet to give us an official Galaxy S3 Mini release date, but it's expected to arrive in stores overseas from early November.

There's no word yet on when the handset is set to make its way to Australia, although you can pre-order from the likes of Mobicity.

Find out more: Samsung Galaxy S3 Mini release date: when will you get it?

If you want some more information on the Samsung Galaxy S3 Mini, check out our first look video below.

There's some tough competition for the Galaxy S3 Mini to contend with in the middle of the mobile market, with the likes of the HTC One S, Sony Xperia S and Samsung Galaxy Nexus all vying for position.

Will consumers pick the Galaxy S3 Mini over these other offerings? Only time will tell, but we'll have a better idea once we've had a chance to put the handset through its paces in our Samsung Galaxy S3 Mini review.

We hope to have a review unit in the pretty near future (according to our underground wombat sources), so keep an eye out for our full, in-depth Samsung Galaxy S3 Mini review coming soon.