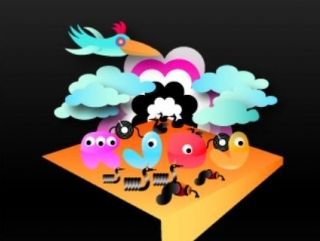 There are a handful of technologies in the world which make us go "er, what?" and RJDJ is certainly one of them. But the makers of this immersive iPhone music app have put its 'reactive' features to good use and created a whole album of new music, exclusive to the iPhone.

The album has been created by minimal techno wizards Kids on DSP – a dance collective from London that specialises in reactive music.

As it uses the RJDJ app, the music on the album becomes specific to the user. If they are in a loud place, the tracks will react to the noisiness of the environment. The same will happen in a quiet place; the music will become more ambient.

You can also add your own sounds to it. If you shake your iPhone or tap it against something, the sound will be incorporated into the music – just don't break the screen as all you'll get is a loop of your expletives.

While TechRadar is by no means hip enough to understand the machinations of reactive music, on the RJDJ website, Kids on DSP are described as: "The kids don't play guitar, they don't play keyboard and they don't sing, their playground is the realtime signal, they play dsp.

"They highjack your perception, dub it, bitcrush it, twist it, pitch it, process it, put it back together and inject it right into your brain.

"The kids are thieves who sneak into the signal domain of your environment, rewire it and make it pulse and groove and mash it with beats. The kids are the music you can't think of. The kids don't give a s**t."

If this sounds like your cup of tea and you're an extra in your own Nathan Barley-esque world, then you can download the Kids on DSP app from the App store now and it will cost you a mere £2.99. Illicit drugs to accompany the application will, of course, cost extra.