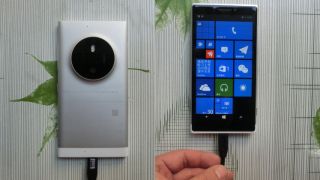 Is this Microsoft's next Lumia?

The transition from Nokia to Microsoft may be complete, but the Lumia brand isn't going anywhere just yet.

A new leak has appeared, reportedly showing the next handset in the Lumia line-up - called either the Lumia 1052 or Lumia 1030, depending on which source your read. It appears to be a follow up to the Nokia Lumia 1020 and sport an even more impressive camera.

Unnamed sources put the camera on the new Lumia at 50MP, with a shutter-less design and a 4th generation short pulse LED flash.

The body is set to get bigger to incorporate the camera upgrade, putting the screen size at 5 inches with a Full HD resolution. According to the leak, the chassis is crafted from aluminium apart from a small strip at the base.

Like its Lumia bretheren, the Lumia 1052 or Lumia 1030 will run the latest version of Microsoft's Windows Phone OS. A report over at SlashGear contends that the handset could be Nokia's "McLaren" smartphone that was planned as a follow up to the Lumia 1020 last year.

That device was rumoured to have a "3D Touch" interface that worked like the Microsoft Kinect, using air gestures as well as touch ones.

Of course, this leaked image is likely to represent a prototype that could be refined and changed before a possible consumer release. Predictably, there's been no word from Microsoft on the authenticity of the image.

All we've heard from the brand is a few comments back in September that they were continuing to work on a successor to the Lumia 1020.

If we were betting types, we'd be willing to wager that Microsoft could have a new Lumia device ready for unveiling next year at MWC. Both in order to cement its ownership of the brand and push its operating system into contention for 2015.