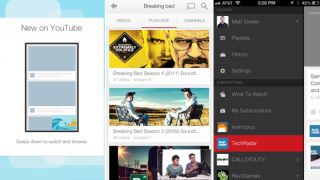 Multitasking with your main source of procrastination

Google may be the algorithmic brains behind Android, but the company is playing fair with Apple devices by updating its YouTube iOS app at the same time as the Android version we demoed yesterday.

That's good news for multitasking iPhone and iPad owners who find that watching just one video isn't enough sometimes. The big change here is that users can minimize a video while searching for content they want to play next.

This functionality arrived on Android at the same time today, though we were able to report on the Android version yesterday thanks to an early APK that was made available outside of the Google Play store.

The differences between the YouTube iOS and Android app updates? There are none, according to Google.

"The iOS has the same features and design as the Android update this morning (they launched at the same time), save for small platform design differences," a Google spokesperson told TechRadar.

That's good news because it means the in-app multitasking and new ability to search public playlists makes the YouTube viewing experience easier no matter which platform you're on. Oh, unless that platform happens to be Windows Phone in which the app is blocked.