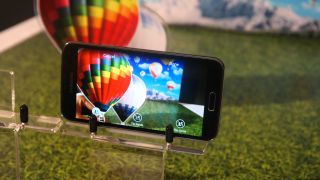 While we're still waiting for the Galaxy S5 to launch it looks like Samsung might already be working on something even better - or at least something with a higher resolution screen anyway.

A device listed as the SM-G906S has appeared on GFXBench and while the 'Info' tab is hidden, keeping most of the details of the handset locked away, the mystery phone is listed as having a QHD (2560 x 1440) display. That would one-up the 1080 x 1920 display on the Galaxy S5.

It scores well in GFXBench's tests so it should be pretty powerful too, though it falls slightly behind the Samsung Galaxy S5 so we could be looking at a curious mix of a better screen with less power.

A galaxy of possibilities

Whether this is a variant of the Samsung Galaxy S5 or an entirely new beast isn't clear, though given the differences in both screen and performance it looks like this could be something totally new. On the other hand the model number isn't super far removed from the Galaxy S5's SM-G900 number, so a variant is still possible.

So what is it? And when will we see it? So many questions and so few answers. But we're sure this won't be the last we see of the SM-G906S so hopefully we'll get some soon.