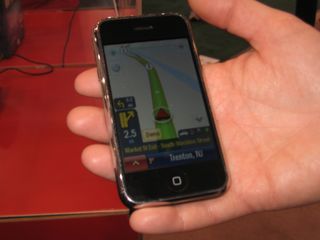 Seeing the software running on the iPhone certainly gives you a glimpse of what might be...

One of the more exciting little titbits we've spied this CES is at CoPilot's stand in the automotive tech hall – a technology demo of turn-by-turn directions on the iPhone and on Android! We saw both in action and while we're sure Apple won't be that pleased, who cares?

The version running on the T-Mobile G1 seems a little more responsive, but to see it running on the iPhone is exciting, even if it's only portrait-only in this early version.

ALK, the company behind CoPilot says it'd love to offer it to iPhone owners via the App Store. "It's an early version obviously, but the basics are there," said European Marketing Director David Quin in conversation with TechRadar. "It's evidence that it's possible with full turn-by-turn."

The software install is CoPilot Live 7; around 15MB of software and has been made possible because ALK's software engineers wanted to develop versions for the alternative platforms.

Moving through the menus is simple enough using on-screen arrows, though we reckon we could see some swiping actions if the app ever made it onto the App Store.

Will it ever happen?

"People would love to buy it from the App Store," added Quin. "As a company we're relaxing about [talking up] things like this. Ultimately, we're a software company, we don't make hardware."

"What we can do is make it available for the widest number of platforms." Quin said that he was also excited about the inclusion of Windows Live Search in its software for Windows Mobile phones – the company had software running on the HTC Touch HD and Sony Ericsson Xperia X1 on its stand.

Apple has previously been reported to be in cahoots with TomTom to develop a full navigation system for iPhone, but nothing can be substantiated. ALK's tech demo is certainly exciting though.