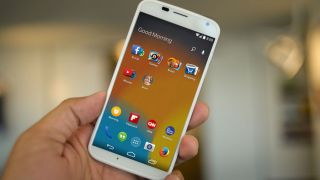 Mozilla has certainly been busy lately. Not only has the company built its own mobile OS, but it's also working on an Android launcher and has just unveiled a screen grab of it in action.

Mozilla describes its homescreen replacement as a way to 'discover the content you want in any moment.'

It's powered by EverythingMe, another homescreen replacement, which makes smart folders based on your interests and suggests apps that you might want to use at appropriate times.

Based on the image shared by Mozilla, the Firefox launcher is very similar to EverythingMe, albeit with a more red panda friendly color scheme.

It knows which apps you want before you do

Below that there's a prediction bar, which suggests apps that you might want to use based on where you are, what time of day it is and other variables. So in this case, as it's morning, the bar suggests an alarm clock and weather app.

The launcher also promises a personalized web experience which combines the Firefox for Android web browser with the contextual app searches of EverythingMe, with the aim of bringing you the most relevant results every time, whether you're searching your phone or the internet.

It remains to be seen whether this 'smart' launcher will be able to compete with the plethora of Android homescreen replacements that are already available, but with the might of Mozilla it certainly stands a chance.