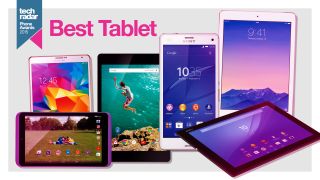 The TechRadar Phone Awards are mere days away, and in the run up to that auspicious event we're announcing the shortlist for all the award categories.

Today we unveil the six tablets that will be battling for our Best Tablet award – a hotly contested title considering the incredibly strong competition this year. These six slates represent the absolute cream of the crop, and if you found yourself tapping away on any of these tablets you'd be very happy indeed.

The winner – which will be selected by our panel of 8 expert judges – will be announced at the TechRadar Phone Awards on July 23, so keep an eye out for which of these excellent tablets is victorious, and in the meantime be sure to check out the rest of our TechRadar Phone Week coverage.

How do you improve on perfection? It's a difficult question, but one Apple has seemingly answered with its excellent iPad Air 2. This is a tablet that takes everything right with the already pretty-blooming-great original, and packs in a host of improvements and new features.

Google and HTC teamed up to bring us the Nexus 9 – a Lollipop-toting 8.9-inch wonder that can give the iPad Air 2 a run for its money and provide a delightfully vanilla Android experience too.

As a showcase of Google's latest Android Lollipop (and later) release, it's got features galore, as well as an excellent pair of built-in speakers.

If there's one company which can really make Apple sweat it's Samsung, and as it proved with the Galaxy Tab S, it's more than capable of producing a tablet that's every bit as desirable as the latest iPad. The Tab S manages the difficult feat of balancing a heck of a lot of horsepower with impressive battery life, so you're not going to be scrambling for a charger every time you want to use it.

Oh, and it has a screen to die for as well.

Sony's compact tablet is thin and light enough to carry with you wherever you go – and it's such a lovely little slate that you'll rarely want it to leave your side. Not only does the Xperia Z3 Tablet Compact feel and look great, it's also waterproof and comes with some of Sony's most impressive screen technology to date.

Two tablets in our shortlist? Sony's just showing off. The Japanese company obviously wasn't content with producing one of the best tablets of last year – as it's only gone and whipped up another one. The Sony Xperia Z4 Tablet is one of the best Android tablets you can buy today, and it comes with a super stylish makeover that will make even the most hardened Apple fanboy raise an appreciative eyebrow.

Apple, Sony and Samsung are all names that you'd expect to see in a shortlist of the year's best tablets but Tesco, the supermarket best known for its cut price groceries? We're not mad (or getting excited about ClubCard points) the Tesco Hudl 2 really is an excellent tablet that brings a pure Android experience, and a surprising amount of power, all for a killer price. What's not to love?