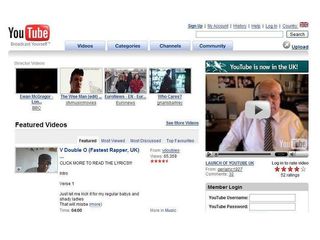 This is what the UK version of YouTube looks like - it will be filled with UK-specific content from selected partners such as the BBC, as well as UK users

Video sharing website YouTube is to go local. Google is trying to infiltrate non-English speaking regions by launching local YouTube versions for audiences in Brazil, France and Japan, as well as Ireland and the UK.

The local YouTube sites will be translated from the US original and filled with content from domestic users, Google announced at a Paris press conference this morning. Google is aiming to eat into the market share from larger, dominating domestic video sharing websites in countries like France, as we reported yesterday .

Google has signed a number of deals with content partners, including international media firms, news agencies and other companies. Among the partners are the BBC and French news channel France 24. Non-profit organisations Greenpeace and Friends of the Earth are also involved, as are football clubs such as Chelsea FC, AC Milan and Real Madrid.

Like the international versions of Google Maps and Google News , the new YouTube websites are in reality just translations of the US original. All site development will be done centrally by Google and YouTube in the US - although deals, advertising, sales and marketing will be conducted at a local level.

Localised YouTube versions now exist in Brazil, France, Ireland, Italy, Japan, the Netherlands, Poland, Spain, the UK and the US. More localised versions of YouTube are to follow, although Google would not confirm which countries will be next.