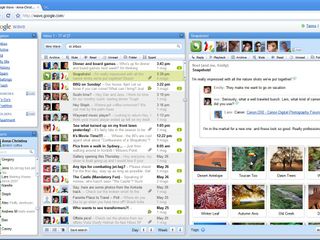 Many of the cool features in Wave like contextual spell checking and live translation are done by 'robot' plug-ins that integrate with Wave (using Yahoo's JSON wire protocol).

You can also search the Twitter timeline for tweets that include a particular phrase.

In addition, you can save searches in Wave; combine that with the Twitter integration and Rasmussen suggests that "you can have Tweety continually search and you can use that like Twit Alert; whatever you are interested in will just pop into your inbox."

The Twitter users that you see in the list of people you're following look like other Wave members even though they may not have Wave accounts.

For the developer preview of Wave you do have to sign in with a Google ID, says Google's Stephanie Hannon, but one day you might be able to send waves as well as tweets to Twitter connections or use Twitter to sign in to Wave. "We'd like to integrate with something like Friend Connect and let people use different authentication systems to get to Wave but we're not there yet."

Installing extensions like Tweety will be simple in Wave, Rasmussen promises; you can install an extension directly from a wave (just like Add-ons in Firefox) and start using it straight away.