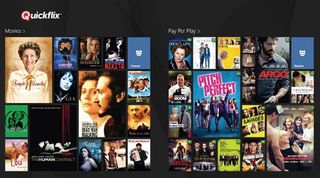 You can Quickflix almost everywhere now...

The video-on-demand services is now available through Nokia Collection and Windows Phone app stores, as well as on iOS and Android devices, PlayStation 3, Xbox 360, PC and Mac and certain smart TVs.

Available from $14.95, the Quickflix app will also be integrated with Window's Phone 8 Kid's Corner, which will list TV programs and films specifically aimed at children.

Quickflix currently has a library of more than 60,000 titles, though it looks to face some streaming competition from the newly-released Foxtel Play IPTV service.

Neither are as cheap or wide-ranging as Netflix, but it's nice to see them at least trying to give us Aussies more choice.

Already downloaded the Quickflix app? You don't need an app to stream these blips.