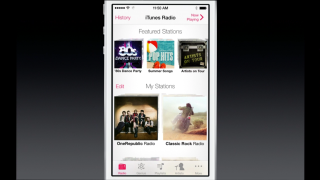 Well we don't think it's so bad

With the introduction of iTunes Radio at

yesterday, Apple is hoping to win the Spotify types over when the music streaming service rolls out later in the year.

However, Jyrki Rosenberg, VP of Nokia Entertainment, pitched in to comment that while Apple might be feeling confident about its foray into the streaming game, it was still dragging behind the times.

"Apple is still playing catch up with Nokia Music," said Rosenberg, taking a swipe at the new iTunes-based service.

"We launched our streaming radio service in 2011. It's interesting to see Apple react now and it seems they continue to play catch up."

'No one likes Led Zeppelin anyway'

iTunes Radio will offer a Spotify-style service to users for $25 a year (which should be matched at £25), offering music discovery through theme stations.

For those who haven't caught on yet, iTunes Radio is the fabled iRadio that's been rumoured for just about forever, but under a, frankly, much better name.

It will be accessible through iOS 7 and iTunes for Mac, PC and Apple TV.