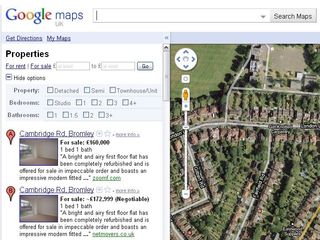 Google has unveiled its latest addition to its Google Maps service – property searching.

This is a service that was hinted at back in late 2009 and one which has divided Estate Agents, particularly Right Move who already runs a similar paid-for service.

So far, Spicer Haart, Bairstow Eves, Bridgfords and Sotherby's International, and have signed up to have their properties listed by Google, with the remainder of the listings coming from, Think Property, Zoopla, Property Finder and Vebra.

Speaking about the service, which has been called Real Estate Search, Andrew Foster, product manager at Google said: "About half of the queries on Google have a geographic component.

"We want Google Maps to be a map that contains all of the world's information. We know that many UK home buyers are already using Google Maps in their house-hunting, and by adding property listings to the map we're putting everything together for them in one place."

RightMove will be hoping that Google's service doesn't gazump what they already do. But when it comes to paying for something or getting it for free, web users always do seem to veer to the free.

To see the property service in action, check out the YouTube video below: